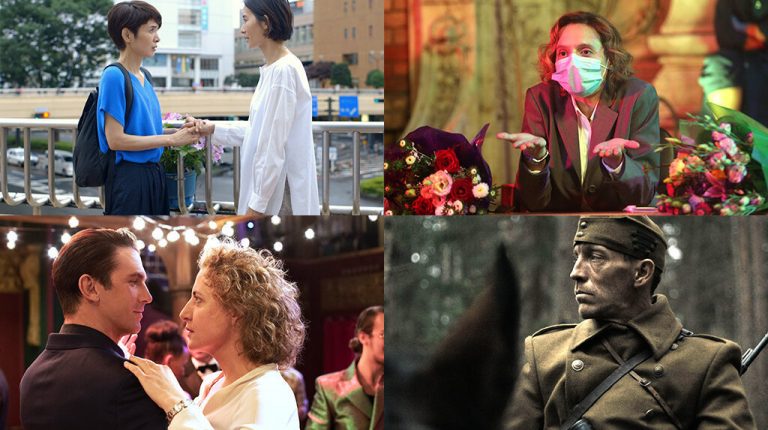 The controversial films divided critics, due to its explicit hardcore sex scenes. It was also the only film in the main competition that directly portrayed the current novel coronavirus (COVID-19) pandemic.

The jury described the film “as a wild one, clever and childish, geometrical and vibrant, imprecise in the best way.”

It also noted that the film “attacks the spectator, evokes disagreement, but leaves no one with a safety distance,” and also praised the work for capturing “the values and the raw flesh of our present moment in time.”

The jury statement on the film said, “In the place where dialogues and words usually end, the dialogues of this film only begin. That’s when they go deeper, so deep that, amazed and troubled, we ask ourselves: How much deeper can it go? The words of Hamaguchi are substance, music, and material.”

“At first it looks almost minor: a man and a woman, sometimes two women, stand in a room with white walls,” the statement also said, adding, “Then the scene moves forward, and as it advances you feel that the whole universe, including yourself, is standing there with them inside this simple room.”

The Silver Bear Jury Prize went to Mr Bachmann and His Class by Maria Speth (Germany). On the film, the jury said, “In a film, you can draw attention to deep problems by sticking your finger into the wound or showing hope and giving inspiration as how to achieve a positive change. The latter is the strategy that the director of this tenderly powerful documentary chose to follow.”

The statement continued, “Always keeping the right distance, the film focuses on one of those ‘field workers’ of our society who defines the most formative years of our children, influencing deeply their attitude towards life.”

As seen through the eyes of the director, this teacher is unique, the jury noted, adding that he reshapes, softens, and makes more human, and through that humanity makes much more efficient a system in crisis, our European educational system.

The Silver Bear for Best Director went to Dénes Nagy for Natural Light, a Hungary/Latvia/France/Germany co-production. The jury described the film as, “Appalling and beautifully shot, mesmerising images, remarkable direction and a masterful control of every aspect of the craft of filmmaking, a narration that transcends its historical context.”

They added that it was “a portrait of war, in which the observant gaze of the director reminds us again of the need to choose between passivity and taking individual responsibility.”

The Silver Bear for Best Leading Performance went to Maren Eggertin the German production I’m Your Man by Maria Schrader.

The jury described Eggert’s performance saying, “Her presence made us curious. Her charm made us empathic. And her palette of performing qualities allowed us to feel, laugh and ask questions.”

It added, “Confidently bringing to life an excellent script, supported by wonderful colleagues and her director, she created a memorable character that we can identify with, leading us to think about our presence and our future, our relations and what we really want for ourselves.”

The Silver Bear for Best Supporting Performance went to Lilla Kizlinger Forest, in I See You Everywhere by Hungarian director Bence Fliegauf.

The jury statement said, “Lilla Kizlinger bears on her young shoulders with grace and delusive natural lightness a special responsibility.”

It also said, “By the power of her interpretation alone, by her intensive presence, she pulls to the surface the hidden layers of the scene, actually defining the motive behind the film: the chilling menace of the world, what the children of today inherit from us grownups.”

The Silver Bear for Best Screenplay went to Hong Sangsoo for Introduction. On the film, the jury said that the Korean film is more than a story, or advancing a narration with efficiency.

“This script fabricates those momentary intervals between one action and another, where, for an instant, a hidden truth of human life is suddenly revealed, bright and lucid,” the jury added.

The Silver Bear for Outstanding Artistic Contribution went to Yibrán Asuad for the editing A Cop Movie by Mexico’s Alonso Ruizpalacios.

“The Silver Bear for Outstanding Artistic Contribution goes to the masterful editing concept of a daring, innovative work of cinema which blurs the boundaries between fiction and reality and boldly explores the cinematic language’s ability to shift our perspective on the world,” the jury said, “Playing an essential role in supporting the filmmaker’s unique vision, the montage skilfully deconstructs the multiple layers of reality and language to offer an in-depth, thought-provoking look into one of Mexico’s most controversial institutions.”

Generation Kplus and 14plus: The Awards of the Generation International Jury

From a selection of a total of 15 feature films, and due to the pandemic with one jury for both competitions, the members of the International Jury of Generation were: actress Jella Haase (Germany); director Mees Peijnenburg (Netherlands); and director/writer Melanie Waelde (Germany). They announced the following winners:

The Grand Prix for the Best Film in the Kplus competition is endowed with €7,500 by the German Children’s Fund. It went to Summer Blur by Chinese director Han Shuai.

On the film, the jury said, “This film convinces with its energetic strong visual power and its outstanding combination of all levels of filmmaking, and creates a summer fairy tale that dances on the edge of a nightmare.”

“In every second, one could sense the heat, the thick air, and the pressure that is on the main character,” the jury statement added, “The focus is always on the children’s feelings, perspective, and perception, which gives the possibility to share the pain of finding ourselves and our way.”

A Special Mention in the Kplus competition went to A School in Cerro Hueso by Betania Cappato from Argentina.

On the film, the jury said, “With beautiful, heart-warming and strong cinematic vision, the spectator gets invited to a hypnotic and spiritual journey.”

The jury highlighted that it is an intimate and personal film that leaves space and creates space, searches for the similarities rather than the differences, and looks openly into the world and thus enables a sensitive, hopeful vision of solidarity.

The Grand Prix for the Best Film in the 14plus competition, which comes endowed with €7,500 by the Federal Agency for Civic Education. This year, the prize went to The Fam by Switzerland’s Fred Baillif.

The jury compared the film to “a rushing, energetic, pulsing heartbeat,” adding that “the film pushes its characters and viewers in brutal honesty through different stories and incidents.” It also noted that the film is “carried by captivating and strong acting performances it never loses its balance between power and vulnerability.”

A Special Mention in the 14plus competition went to Cryptozoo by US director Dash Shaw.

The jury said the film portrays sensitive characters in a beautiful and brutal dystopian world, and that theis film gives a ray of hope while it raises big questions.

“This outstanding artwork naturally handles topics like sex, gender, war, society and relationships,” the jury statement said, “[The film] is a stepping stone to question society and to never forget to use our imagination for new perspectives, and represents a mind-blowing, disturbing, and visionary trip.”

“Stunned and amazed, we discovered many different parts of the world and were invited to numerous beautiful, exciting and thrilling homes and realities,” the three jurors said, “The films touched us deeply. Gratefully we experienced this beautiful mirror of society and we are thankful to all the brave filmmakers who hitchhiked us sharing their extraordinary visions.”

The Crystal Bears awarded by the official Berlinale Generation Children’s Jury and the Youth Jury will be announced in an award ceremony during the Berlinale Summer Special in June. The independent Jury AG Kino Gilde 14plus which focuses on the Generation 14plus selection will also announce their award during the Summer Special.

The Award Winners of Berlinale Shorts 2021

A total of 20 films competed in this year’s short film competition at the Berlinale. The International Short Film Jury included the Egyptian artist Basim Magdy, the Austrian cinematographer Christine Maier, and the German actor Sebastian Urzendowsky. The trio announced the prizes for the following films:

The Golden Bear for Best Short Film went to My Uncle Tudor by Olga Lucovnicova. The short documentary is a co-production from Belgium, Portugal, and Hungary.

The jury statement said, “Olga Lucovnicova leads us through the complexity of unravelling a childhood trauma. While intimate details gradually introduce us to a seemingly idyllic world of innocent nostalgia, her conversation with her Uncle Tudor builds up to expose her childhood horror and his unrepentant denial.”

It added, “Lucovnicova’s subtle cinematic gaze circles around her family members with precision. Her personal courage combined with cinematic mastery create a film that is both powerful and emotionally layered.”

The Silver Bear Jury Prize went to Day Is Done by China’s Zhang Dalei. On the film, the jury said, “The intricately woven family dynamics and superb acting immerse us in a genuine moment in their lives.”

The Berlin Short Film Candidate for the European Film Awards went to Easter Eggs
by Nicolas Keppens, an animation co-produced by Belgium, France, and the Netherlands.

The awarding of prizes to a documentary, a fiction film and an animation reflects the breadth of the Berlinale Shorts’ film selection.