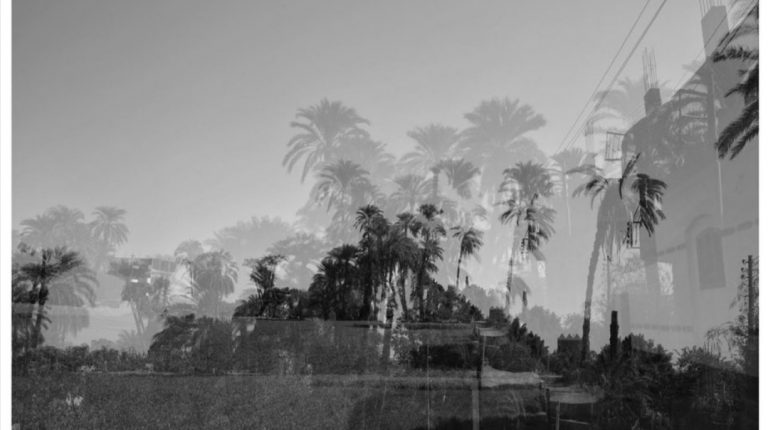 The quote “Some of the sweetest memories are connected with some beautiful places” perfectly expresses the meaning of some places in our memories.

How people perceive and experience a place, and whether there is an emotional bond between them and the place, is highly influenced by their personal experiences. However, there are some places on earth where certain feelings seem easier to find, and places inside us seem easier to reach.

Some experts say that the plants, animals or people in the space have their own life force, or ethericity, which will add to the ambience of the place.

On the other hand, buildings, just like smaller objects, pick up imprints of what happened there, and from the people that have stayed there. This happens whether we are conscious of it or not, and it can also be used consciously to create beautiful, warm, and sacred spaces.

The Egyptian Photographer Romany Hafez’s latest photography exhibition aims to present thoughts, feelings, memories, and interpretations that maybe evoked by certain landscapes. The exhibition To Be Presented digs deeper into places which carry many memories.

Daily News Egypt set down with Hafez to discover more about his artistic dilemma, and how certain feelings seem easier to find in certain places.

“Spaces have their own identities, noises, voices, own silence, encounter cannot be expect within spaces,” Hafez said.

He launched the To Be Presented exhibition to present the idea and concept of place in the visual memory of its visitors, and monitor the movement inside different places.

Hafez said that when visitors enter archaeological sites, they always imagine who lived in those places and what these previous lives were like. By monitoring the movement inside the place, it gives the viewers some space to run their imagination about who inhabited those places in previous times.

“My artistic dilemma is about the place, because in order to present the feeling each place reveals for its visitors, I think that some places affect people, and some people affect places,” Hafez added.

He said that there are just places where certain feelings seem easier to find, such as happiness or feeling overwhelmed. When entering the same place, a different person many find different emotions, for example some people may think that a certain place gives a feeling of happiness whilst others feel that the place is gloomy.

“It is not just the cultural legacies and cultural accumulations about certain places that give the people such feelings, but also every place contains a certain energy that affects the feelings of its visitors,” indicated Hafez.

He also uses only black and white photography for his exhibits, as it gives the viewers a nostalgic feeling, adopting two camera techniques, several exposures knitted together in one piece, as well as long exposure times.

“The black and white photos are very colourful, because these pictures give the viewer a wider space for the imagination, they can create the colours they want, creating a nostalgic feeling, and raising questions about the subject of the image,” Hafez said.

The multi-exposure technique relies on layering several different exposures into a single image, combining more than two photographs into one. It gives a surreal edge to the photos, allowing the photographs to work together to convey deep meaning or symbolism.

“Using the multi exposure aims at making the viewer see my visual thinking process when taking the photo,” Hafez said, “I combine many photographs in one picture instead of selecting only one photo.”

The long exposure technique sees the photographer keep the shutter open for an unusually long period of time, and is a technique used for photographing movement inside a place.

The technique ensures that the image’s people appear as ghosts in the frame, ensuring the focus of the viewers, or lack thereof, does not get distracted from the place itself.

After a period of time following the visit to this place, people will still remember one thing in this place, such as a certain chair or a clock hanging on a wall.

The exhibition showcases photographs by both analogue and digital cameras, with the former being more artistic, Hafez said. He noted that the photographs taken on analogue cameras are more valuable than digital photographs.

He started to present his artistic photos in 2017, in the Picasso Art Gallery in the Cairo district of Zamalek. The gallery has an important role in promoting the photography art in Egypt.

Hafez noted d that the places that inspire him the most are the ancient archaeological sites of Siwa, Luxor, Aswan, and Fayoum. He does not choose famous landscapes, but instead prefers to photography the unknown places, because they give him more space and freedom to capture images.

“I feel responsible as a photographer to represent lesser known places in my photos, encouraging other people to visit those places,” he added.

One aspect that he holds important to his photography is the note that life may surprise you in unexpected ways, and it is a motto that can be used to describe Hafez’ travels.

In one of his photos, he captured an 80-year-old Nubian lady with an infectious smile. For this photo, he had been looking for a Nubian girl with a beautiful smile, but after a long search, he instead found that it was the lady who had the smile he was looking for.

“No one believed that such beautiful young smile could be found in an elderly woman’s face,” he said, “I learned from this experience that the human age is not detected by numbers but with one’s heart. Although she lived a lot and went through difficult circumstances, she still has a young, lively spirit.”