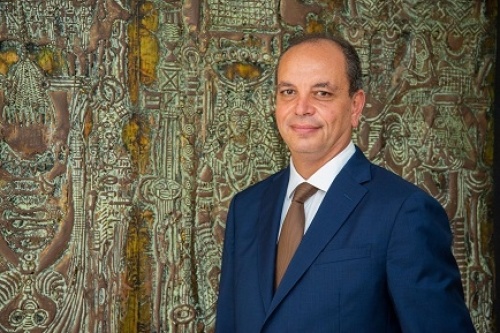 Sameh Shenouda was, in mid-February, appointed as the new Executive Director and Chief Investment Officer (CIO) at the Africa Finance Corporation (AFC).

The appointment follows his long experience in investments in international capital markets, African markets, and infrastructure development. Shenouda is also one of the most prominent investors in infrastructure solutions in Africa.

He has gained significant experience at the AFC, including at its transport and logistics, heavy industries, and natural resources sectors. Before this, he was CEO of Zarou, a developer, owner, and operator of infrastructure projects in Africa, the Middle East, and South Asia that is 100% owned by The Blackstone Group.

Additionally, Shenouda was previously Head of Infrastructure at CDC Group Plc, the UK development finance institution, in which he built its direct infrastructure equity business. As part of this, more than $1bn was invested in Africa and South Asia. He was also keen to set up new platforms and supporting management teams.

Daily News Egypt sat down with Shenouda to find out more about his plans and vision for the AFC, challenges, and needs in the African market for infrastructure investments.

Shenouda said that he plans to focus on several sectors and invest in them, including renewable power across Africa, transport, logistics, oil and gas (O&G), telecommunications, and technology infrastructure. He also aims to support both government and private sectors.

As for his plans In Egypt, he said that the AFC is keen to invest in transport and logistics, renewable power, water, and O&G. He will push for more AFC activities in Egypt.

“There are few early-stage discussions on projects mainly in transport, logistics, and renewable energy, which I cannot name at this stage,” Shenouda said.

For plans regarding its investments, he said that the AFC invites countries to invest in its capital, noting, “The Nigeria Central Bank is the largest investor in AFC’s capital, so we invest in Nigeria. Also, there are other countries [that followed suit] like Ivory Coast and Ghana.”

As for countries who are providing AFC with support and financing, Shenouda said all African countries can become members or shareholders in the corporation, and that there are currently 28 members out of the total 54 countries in the continent.

On how he assesses the needs of African countries, Shenouda said that the continent currently boasts a mostly youthful population of about one billion people. Fulfilling some countries’ needs depends on the availability of land, with others countries need more investment in transport and power.

“We assess each investment opportunity based on the country’s condition and needs,” Shenouda said.

In general, the availability of infrastructure is the biggest challenge in Africa, as it takes a long time to develop a project, which is one of the areas that the AFC is pioneering.

This is because many international investors would like to see a project that is already built and in which money has already been pumped into it.

“We take development and Greenfield risks, and can support local developers to start a project from scratch,” Shenouda said, speaking on development challenges, “We take that risk and spend money on a Greenfield power project or airport, for instance, which is something that the AFC plays a powerful role in, in helping new infrastructure projects to be developed.”

Shenouda also explained how surrounding circumstances in countries, whether political and economic, would affect investment. He noted that investors always look to several things, including political, microeconomic, currency risks, and the project risk itself.

If a country has high political risk, then this will attract investors. The only difference between itself and other investors is that the AFC is an African company, funded by African institutions, and run by African individuals.

“We feel that we understand our markets quite well, and that we can measure risks,” Shenouda said, “In some cases, we could take a higher perceived risk in some markets, unlike other foreign direct investors who perceive political risk as not acceptable.”

Shenouda explained that the novel coronavirus (COVID-19) pandemic had affected the economies, governments, and sources of income in private sectors very badly across the continent. This also affected mining companies in Africa, which have been affected because of the reduction in commodity prices.

The COVID-19 pandemic also affected the AFC and other infrastructure investors, whose projects have slowed them as it was difficult for contracts to continue, he noted.

Shenouda added, “Construction of infrastructure was rigid, people were not travelling, and there was difficulty in transferring materials, so a lot of projects were delayed up to three and six months.”

He added, “I see this as an opportunity as the AFC can play a role in developing industry, and developing the value addition of existing raw material production of exciting commodities instead of Africa exporting to raw materials to Asia or elsewhere or manufacturing facilities and beneficiation of mining products, as all this could be done in Africa. This is an area that AFC is keen to focus on.”

Regarding the second COVID-19 wave, Shenouda said that people are more prepared now, and know what to expect. The major hiccup here is that most do not know how long this will take but with the vaccine, you can see some hope.

“It is taking a bit longer than people expected, but we learned how to deal with it during the past month,” he also said.

Speaking on how the AFC worked during the challenging year that was 2020, he explained that one of the things that the corporation does is that it lends financial support to the government.

Some governments had difficulty raising money during the pandemic, and Shenouda noted that the corporation supported a few of them by providing long-term loans.

“We can focus on several areas where we see gaps,” he said, “The important areas for us are related to transport, logistics, and technology.”

He added that sectors such as electronic commerce (e-commerce), warehousing, infrastructure, and data centres have grown and will continue to grow, with the AFC also continuing with the opportunities in these sectors.

“With COVID-19, technology saw widespread implementation across the world, and we would like the AFC to lead this direction in Africa,” Shenouda said.

Shenouda speaks about his vision for the AFC, saying, “I have worked all my career in Africa, I have a passion for doing good while doing well, and this is exactly what AFC is about. We are doing well as well as doing commercials.”

He added, “The AFC is an entity that is looking to grow large profits and make good investments while doing good by helping the African people and economies grow their infrastructure, so that people find jobs and alleviate poverty and help with climate change and for a greener economy.”

This combination of being commercial and at the same time contributing to the community is what attracted Shenouda to play a part in the AFC.

“My objective is to help the AFC grow in doing these two roles,” he also said, concluding that being CIO of AFC is an exciting opportunity. He noted that he is keen to support the company by diversifying geographically and doing more in Africa.