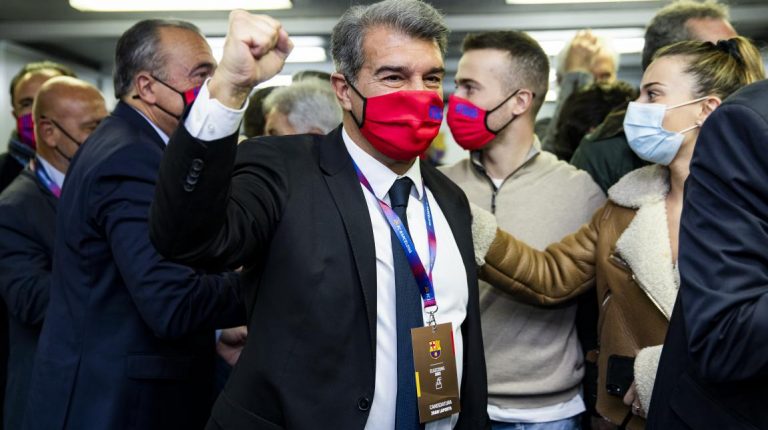 Barcelona fans are hoping for a new golden period with Joan Laporta’s return to the club, following his win of the presidential elections on Sunday.

Laporta returns to leading Barcelona for a second term, following his previous highly successful leadership in a period that fans of the Catalan club considered golden in every sense of the word. During his previous term at the club in the period from 2003 to 2010, Barcelona won 12 titles.

Not much is currently being said inside the club about the administrative, legal, and economic problems that it is going through. These include the arrest of its former president Josep Maria Bartomeu, as well as the Argentine legend Lionel Messi’s request to leave the Catalans. Put together, it makes the team’s fans look at Laporta as the club’s saviour from all its crises.

In 2003, when Laporta took over the presidency of FC Barcelona for the first time, the club was going through similar conditions. However, he turned things around economically, making the club thrive again on a financial level.

He contracted with the Brazilian star Ronaldinho, as well as several other stars. He also appointed Dutch coach Frank Rijkaard, and winning titles did not take long during Laporta’s tenure. The second season of his presidency saw the Catalan team winning the Spanish league title in the 2004-2005 season.

In the following season, Laporta crowned his revolution by winning the UEFA Champions League and La Liga titles, amid the brilliance of the Spanish club locally and in Europe.

In late 2008, he signed Spanish coach Pep Guardiola as the team’s technical director to inaugurate an unforgettable golden period in the minds of FC Barcelona fans. The club won the La Liga, the Spanish Cup, the Spanish and European Super Cups, in addition to the Champions League and Club World Cup.

During that period Barcelona presented a distinct performance, the best in its history. The Tiki-Taka style that Guardiola followed, along with the performances of Messi, Xavi, and Iniesta, was the talk of the world among all football fans in the world.

Laporta’s last season in his first term in 2010 also saw Barcelona win the Spanish league title, before he left the presidency of the Catalan club.

The most important file for the new president is to persuade Messi to stay at the club, by renewing his contract. This is expected to come despite the economic crisis hitting the club, as well as the rest of the world, due to the novel coronavirus (COVID-19) pandemic.

Sports Talk: Messi not yet the best

FilGoal: Laporta, 'It's more than a match'