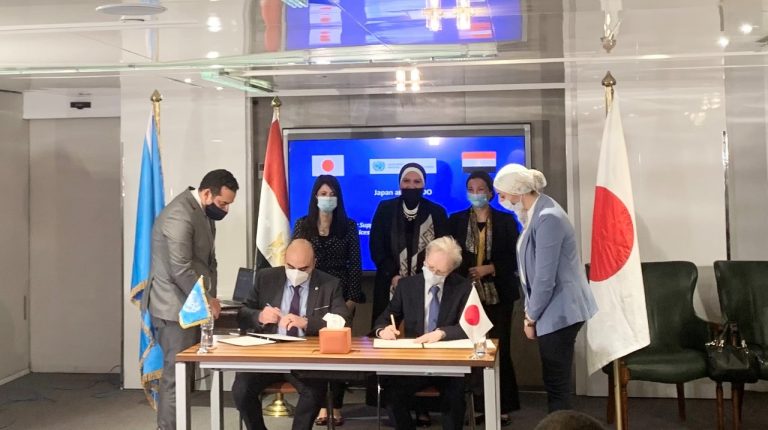 The Japanese government and the United Nations Industrial Development Organization (UNIDO) have signed an exchange of notes to promote circular economy practices regarding single-use plastic in Egypt.

According to the agreement, the Japanese government will offer Egypt a total of $3.57m as aid.

Noke Masaki, Ambassador of Japan to Egypt, and Bassel El Khatib, Director of the UNIDO Regional Office in Egypt, signed the agreement on Tuesday.

The signing ceremony was witnessed by senior government officials from Egypt, including: Rania Al-Mashat, Minister of International Cooperation; Yasmine Fouad, Minister of Environment; and Nevine Gamea, Minister of Trade and Industry.

The project will support government efforts to reduce the amount of plastic waste leaking into the environment by demonstrating alternative greener approaches. It will offer technical assistance to small- and medium-sized enterprises (SMEs), as well as raise awareness of sustainable production and consumption patterns of plastics among stakeholders, producers, and consumers.

This multi-level approach is expected to support the development of policies, regulations, and economic tools, that will facilitate the adoption of greener processes within the single-use plastic value chain.

During Japan’s presidency of the Group of 20 (G20) in 2019, the “G20 Osaka Blue Ocean Vision” was announced with the aim to reduce additional pollution by marine plastic litter to zero by 2050.

To support the move, Japan launched the “MARINE Initiative”, to advance effective actions to combat marine plastic litter at a global scale.

Under this initiative, funded by Japan, UNIDO has been conducting a plastic value chain study in Egypt, in collaboration with the Japan International Cooperation Agency (JICA). The study explored the possibility of introducing sustainable technological options such as alternative materials, packaging technology, and recycling technology.

The project contributed to UNIDO’s Programme for Country Partnership (PCP) for Egypt, launched in February 2020, which aims at achieving inclusive and sustainable industrial development.

“This agreement expresses the joint cooperation between the Government of Egypt, UNIDO, and the Government of Japan,” Minister Al-Mashat said during the signing ceremony, “It will promote the circular economy and preserving the environment with a focus on integrating the private sector and SMEs into this field, which will support the economic development in our country.”

Ambassador Noke said, “the Japanese government has tirelessly promoted 3R (Reduce, Reuse, Recycle) with cooperation of industry and citizens since the 1990s.

“Plastic packages and bottles in Japan are now known to have most waste-free designs,” he noted, adding, “I am sure technology transfer through this assistance will lead to concrete actions that will protect the bountiful sea around Egypt for future generations.”

The ambassador expressed his hope that the project will act as a catalyst for Egypt’s plastic industry to become a new engine of growth in the era following the novel coronavirus (COVID-19) pandemic. This will come at a time when the efforts to achieve circular economy are accelerating around the globe.

For his part, Al Khatib said, “We appreciate Japan’s continuous support to UNIDO and Egypt. This project is part of the Green Industry Component of the PCP- Egypt. This Component aims at increasing productivity and reducing the negative environmental impact in the Egyptian manufacturing sector.”

He also said, “The new project will follow an integrated framework to enable the green transition of single-use plastics production and consumption, combining regulation, institutional support, firm level support, new technologies, and skills enhancement for sustainable manufacturing. This will help achieve the inclusive and sustainable industrial development in Egypt.”