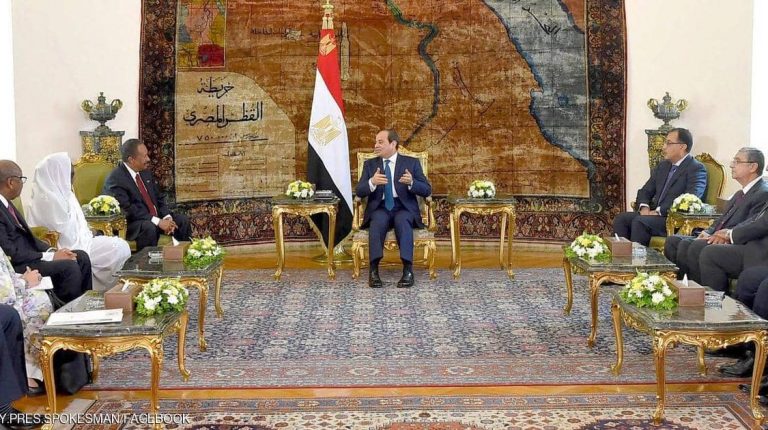 Egypt’s President Abdel-Fattah al-Sisi held talks on Thursday with Sudanese Prime Minister Abdalla Hamdok in Cairo, where they agreed to intensify coordination over the issue of the Ethiopian Nile dam, said the Egyptian side.

Sisi and Hamdok also agreed to intensify contacts with regional and international parties to activate the Sudanese proposal of forming an international quartet to be led by the African Union (AU) to mediate in resolving the Nile dam issue.

They reiterated the hopes of Egypt and Sudan “to reach a comprehensive and legally binding agreement on the rules of filling and operating the Grand Ethiopian Renaissance Dam (GERD)” before the next rainy season.

The talks came a few days after Sisi paid a visit to Khartoum where he expressed Egypt’s full support to the security and stability of the neighboring country.

Ethiopia, an upstream Nile basin country, started building the GERD in 2011, while Egypt is concerned that the dam might affect its 55.5-billion-cubic-meter annual share of the Nile water. Sudan has recently been raising similar concerns over the 4-billion-U.S.-dollar dam.

Over the past few years, tripartite talks on the rules of filling and operating the GERD, with a total capacity of 74 billion cubic meters, have been fruitless.

Ethiopia carried out the first phase of filling the dam in July 2020 and is expected to start the second phase later this year.

“We hope that this filling will be done in a way that we agree upon and we can reach an agreement for that,” Hamdok told a later joint press conference with his Egyptian counterpart Mostafa Madbouly.

After his meeting with Sisi, Hamdok, who led a delegation of several Sudanese ministers, held talks with Madbouly on various areas of cooperation between Khartoum and Cairo.

The two prime ministers discussed projects of power linkage, railway and road connectivity between the two countries, in addition to prospects of joint projects in the fields of education, scientific research, agriculture and others.