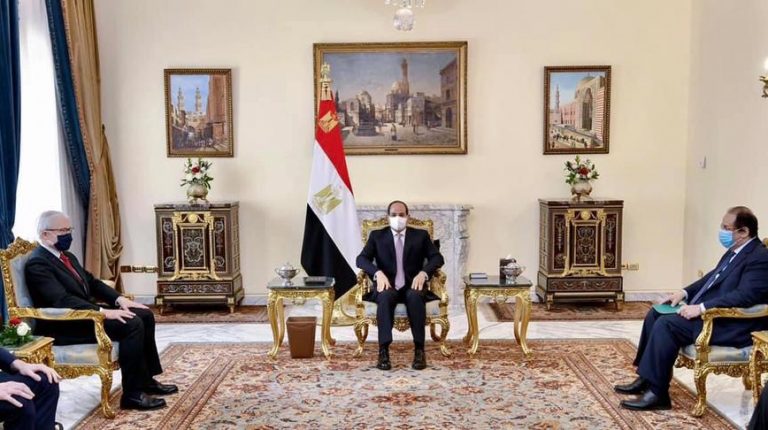 Bassam Rady, the Egyptian Presidency’s spokesperson, said that Al-Sisi welcomed Émié, and asked him to convey his greetings to France’s President Emmanuel Macron.

For his part, Émié conveyed the French President’s greetings to Al-Sisi, with Macron also expressing his country’s pride in the constructive cooperation and close relations linking France and Egypt.

Émié stressed France’s keenness to maintain continuous coordination with Egypt on all issues of common interest in the region. This particularly relates to developments in the situation in the Middle East and the eastern Mediterranean, as well as Africa.

Rady added that, during the meeting, the two sides discussed several issues of bilateral cooperation at the security and military level, and exchanged views. They also reviewed various regional and international issues as part of security and intelligence cooperation between the two countries. This particularly related to combating the spread and threat of terrorism and extremist organisations at the regional and international levels.

Al-Sisi stressed the importance of regular coordination in this regard, to develop efforts to combat extremist ideological ideology, violence, and terrorism, and to increase pressure on terrorist organisations and groups.

He highlighted that restoring the institutions of countries suffering from crises would achieve security and stability throughout the entire region, and undermine the dangers surrounding them.

The Egyptian President also briefed Émié on Egypt’s vision of developments related to several regional issues in the eastern Mediterranean, as well as the situation in Libya.

Émié praised the positive impact of Egypt’s efforts in eastern Libya, which supported the course of political negotiations in pursuit of a comprehensive solution to the issue.