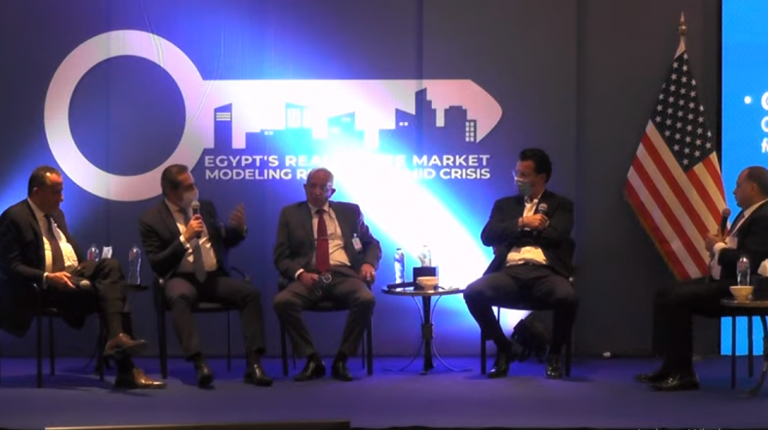 Ahmed Badrawi, Executive Vice-Chairperson of Marakez for Real Estate Investment, said that Egypt’s soft infrastructure is represented in the country’s 100 million citizens, whilst its hard infrastructure helps them to live.

In a roundtable held on Wednesday by the American Chamber of Commerce (AmCham) in Egypt, titled “Egypt’s Mega Projects: New Cities Shaping the Future”, Badrawi added that the country has recorded a great achievement in establishing a solid and strong infrastructure.

He further noted that with the huge development in infrastructure, any foreign investor would be encouraged to debut and launch businesses in Egypt.

Similarly, Deputy Minister of Housing, Utilities and Urban Communities Khaled Abbas said that the Egyptian Government has provided strong infrastructure for environmentally friendly green cities. This will facilitate life for citizens, in the line with international standards applied.

Abbas added that the government has great interest in providing the services and job opportunities to attract and encourage citizens to accommodate new cities.

He further noted that recent amendments to the Investment Law’s Executive Regulations have seen the New Administrative Capital (NAC) added to Sector (A), relating to areas most in need of development according to the investment map. This will facilitate investment opportunities in the project.

He believes that the investments in Egypt’s real estate sector will increase during the next two years. He gave the example of the New Urban Communities Authority (NUCA), affiliated to the Ministry of Housing, Utilities and Urban Communities, which has approved its EGP 140bn-budget for fiscal year (FY) 2021/22.

Of this figure, 70% will be allocated for infrastructure works, compared to approximately EGP 7bn in FY 2014/15.

“I think that transportation oriented development  contributes to urbanisation of any city and promotes sales, which in turn hikes property prices and raises their value,” El Gammal pointed out.

For his part, Hossam El Din Mostafa, of the General Authority for Roads, Bridges and Land Transport, said that Egypt is cooperating with Sudan, Chad and Libya to connect Cairo with Chad.

He revealed that Egypt, Libya, and Chad will sign an agreement soon to develop a road between Egypt, through Libya to Chad to facilitate trade. Additionally, Egypt and Sudan have agreed to establish a railway line from Aswan to Sudan, and to have a logistic area to promote trade exchange between the two countries.

The Land Developers, B.TECH cooperate to provide services to their clients