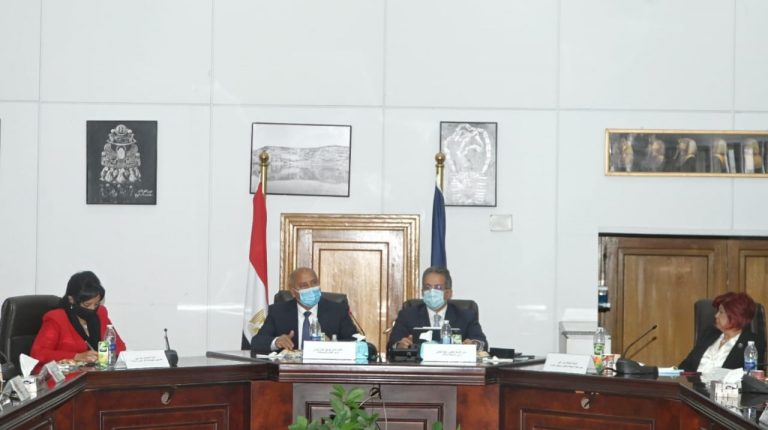 Egypt’s Minister of Tourism and Antiquities Khaled El-Anani and Minister of Transportation Kamel El-Wazir have held an extended meeting to discuss ways of boosting the country’s tourism through ongoing transport projects.

Present at the meeting were Nora Ali, Chairperson of the Tourism and Aviation Committee at the House of Representatives, as well as heads of the Egyptian Federation of Tourist Chambers; the Business Committee of the Chamber of Travel and Tourism Companies and Agencies; and of the South Investors Association Sinai.

Also present were a number of tourism investors and leaders of the two ministries, as part of fruitful cooperation between the Ministries of Tourism and Antiquities, and Transportation.

El-Anani began the meeting by highlighting the importance of cooperation with the Ministry of Transportation, due to the link between all transport sectors with tourism development.

He praised the development of transportation and infrastructure and the impact of these developments in Egypt on the tourism sector.

During the meeting, El-Wazir reviewed the developments in all transport sectors, which reflected positively on the tourism sector.

The two ministers discussed the re-opening of the ferry between the cities of Hurghada and Sharm El-Sheikh, and raising the efficiency of cafeterias on sleeper trains between Cairo, Luxor, and Aswan.

This came in addition to discussing the re-opening of long River Nile cruises with the development of some marinas on the river. This would make optimal use of the Egyptian Center for Safe Driving, part of the Egyptian Federation of Tourist Chambers.

At the end of the meeting, it was agreed to hold intensive meetings between officials from the two ministries to discuss ways to support the tourism sector. These meetings would also look to define a plan for the coming period to serve the tourism sector, and contribute to its appearance in its best form befitting Egypt’s global position.