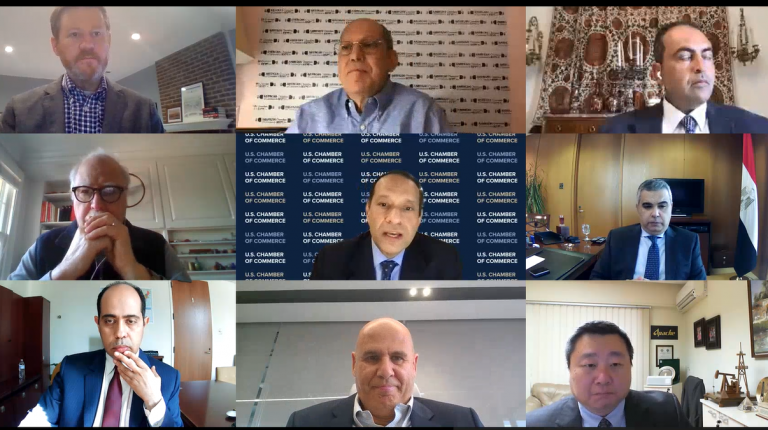 Egypt continues to present an abundance of opportunities in virtually every sector of its diverse economy, according to Motaz Zahran, the country’s Ambassador to the US.

Zahran said that examples of this include infrastructure, and energy in light of Egypt’s plan and huge potential to be a regional energy hub, both when it comes to natural gas and renewable energy.

“This comes in addition to [information and communication technology] ICT, the economy’s fastest growing sector, and many other sectors, including agriculture, health care, transportation, defence and security, all of which continue to be of particular interest to the American business community, and continue to be of mutual benefit to both countries,” he added.

The Ambassador said that the trade and business partnership between Egypt and the US has always been of significant benefit to both countries. It has created jobs in both countries, and, as a result, has boosted the economy in both.

“The structure of the Egypt-US business relation is indeed most promising by far,” Zahran said, “Amongst all African countries, Egypt is the biggest US trade partner, as well as the biggest export market in Africa, and the US is the largest third investor in Egypt which has been for several years, the biggest recipient of [foreign direct investment] FDI, from the US in Africa.”

The Ambassador’s remarks came during a virtual conference for the launch of the “Egypt & the United States: A Shared Future” report, which highlights the social impact initiatives of US companies in Egypt.

The event was organised by the US-Egypt Business Council in the US capital, Washington, in collaboration with the American Chamber of Commerce (AmCham) in Egypt.

Zahran said that Egypt’s economy has manifested by particular resilience in the midst of the novel coronavirus (COVID-19) pandemic. He said that the economic reform programme, introduced in 2016, together with the Egyptian Government’s to ensure that the brunt of the pandemic was muted, all contributed to Egypt’s weathering the pandemic successfully.

The Ambassador reviewed Egypt’s microeconomics results, and praised the country’s curbing of unemployment and inflation. He also applauded Egypt’s recent recognition by international financial institutions, following the country’s achievement of a 3.6% growth rate, unmatched in any other country in the Middle East or Africa.

Zahran said that navigating the pandemic towards these promising economic results of Egypt-US trade and business partnership has been integral and indispensable.

“Despite the worldwide decline in international trade that has naturally affected, to some degree, the business volume between the two countries, businesses and trade has continued uninterrupted,” he noted, “They have even witnessed a remarkable increase in some sectors such as agriculture, for example.”

Zahran said that, of equal importance, is the fact that many of Egypt’s business partners in the US have continued expressing the corporate social responsibility in Egypt.

“They have done so by expanding on social investment programmes, and this is the essence of the report launched today,” he said.

They have continued to mobilise parts of the resources, the returns, and their energies for the development of the society in which they operate.

This has contributed to many fields, including education, health care, micro-financing, food security, small- and medium-sized enterprises (SMEs), agriculture, and others.

During the conference, four big US companies in Egypt and the AmCham Foundation talked about their social responsibility efforts and initiatives that have benefited thousands of Egyptians.

Talking about the report, Steve Lutes, Vice-President for Middle East Affairs, US Chamber of Commerce, said that for members of the US-Egypt Business Council, being a good corporate citizen is far more than just a gratifying slogan. He said that it is an intrinsic part of their business model, mind-set and mission.

He added that the social impact projects being implemented by these companies illustrate a desire to make a real difference in the lives of Egyptians, and a shared ambition to a better future for Egypt.

They may be large, multinational corporations headquartered thousands of miles away, but their work and actions are that of local businesses that care deeply about the communities they operate in and the people around them.