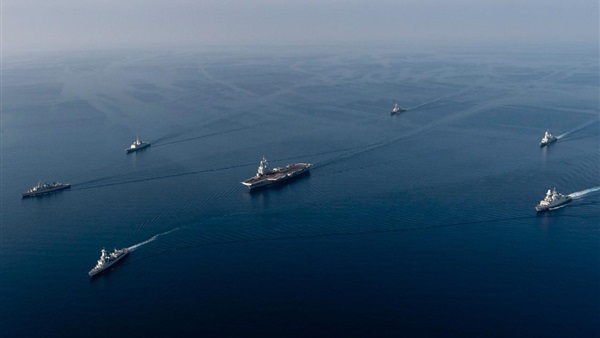 Naval forces from Egypt and France have carried out a transient naval exercise within the southern fleet at the former’s Red Sea base.

The training exercise took place with the participation of the Egyptian frigate Sajm Al-Fateh, and the accompanying combat group of the French aircraft carrier Charles de Gaulle.

The latest bilateral exercises come as part of the Egyptian Armed Forces General Command’s plan to upgrade the level of training, and exchange experiences with the armed forces of friendly countries.

Several joint training activities of a combat nature were implemented, which achieve maximum benefit for both Egypt and France.

Among these activities were the formation of guard curtains of various distances, with the organisation of all types of defences for formation. This came in addition to conducting a joint night sailing exercise, which showed the ability of the joint marine units to repel various threats.

The two sides also conducted helicopter landing exercises on the rooves of accompanying Egyptian and French units, as well as training on implementing maritime security measures in the work areas.

These multiple naval exercises reflect the great development of the Egyptian navy, and the tremendous technological breakthrough that it has witnessed in recent years. Such events also serve to show that the navy is keeping pace with the major global naval forces.

The recent joint exercises also highlight the depth of bilateral Egyptian-French relations, and the continuous endeavour towards preserving maritime security and stability in the region.