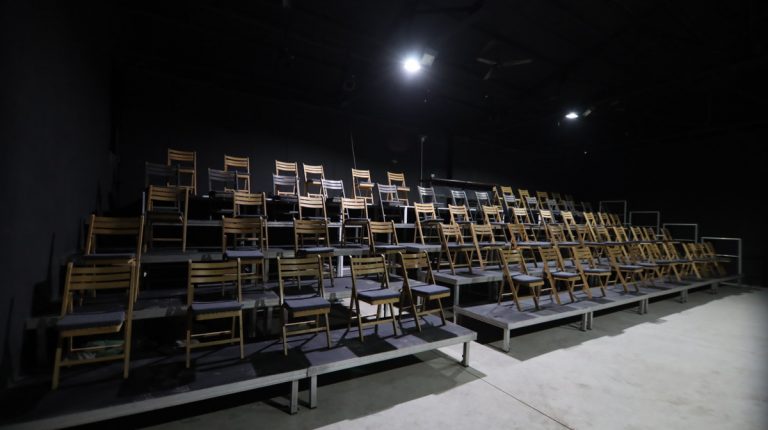 The renowned Rawabet Theatre in Cairo, which firmly established itself on Egypt’s culture scene since its launch in 2005, has made its return in revamped form under Orient Productions.

The theatre has hosted countless independent and alternative performing artists over the years. The venue went through a period of stagnation during which the Orient Productions took over its management, implementing numerous major renovations and working on a comprehensive plan for its operations.

The project was made possible with the support of the British Council Cairo, the Netherlands Embassy in Cairo, Studio Emad Eddin, Al Ismaelia for Real Estate Investment, and the Cairo Goethe institute.

The Rawabet Art Space aims to provide a highly professional multi-disciplinary venue that can inspire and reinvigorate the cultural scene. The space is curated by El-Attar and managed by Mram Abdel-Maqsoud, in coordination with the Orient Productions’ vision.

While focusing on contemporary arts, Rawabet will host theatre performances, dance and music, alongside workshops, seminars, and discussions among other activities reflecting its main scope.

Believing in the power of the young creative voices that have always been the venue’s hallmark, Rawabet welcomes the budding generation alongside the experienced cultural players.

Orient Productions highlighted that it is on the Rawabet Theatre’s stage that many young actors and directors launched their careers, and the former remains committed to fresh voices and their development.

Moreover, the Orient Productions company will be also involved in the production of theatre plays themselves, supporting the promising creative teams all the way through.

It aims to help them push the boundaries and step beyond Rawabet to other local, regional and international stages. Rawabet Art Space welcomes ideas and projects that can inspire, trigger thoughts, add value, or create change in the lives of the artists and the audiences.

Due to the situation of Covid-19 pandemic, the Rawabet Art Space will have its soft launch with some events taking place until the end of Ramadan and their number will increase during the summer months. The official opening of the season will take place in September.

The theatre went through major change and improvement of the interior aiming to boost the theatre’s functionality so it can meet expectations of the contemporary theatre makers and the audience. The upgrades include a total renovation of the floors, walls, pipes and bars serving the lighting and scenography, all electrical cables. The location of the stage has been changed and its size increased from 8×8 metres to 13×8. The auditorium is now expanded so it can accommodate 150-280 audience instead of the previous 120. Taking care of the Rawabet’s cast and crew, the Orient Productions also introduced two dressing rooms and a fully developed backstage with toilets and shower areas.

The theatre has a well developed lobby where the attendees can await the performance while benefitting from the new facilities such as cafeteria with WiFi available, and toilets with the accessibility for the disabled. Equally, the space includes offices for technical and managerial teams fully dedicated to Rawabet’s operations.

The theatre is now offering a large assortment of sound and light equipment, dozens of spotlights, par cans, dimmers, digital mixer, etc. Among important improvements for the theatre is isolation that protects it from the sound coming from the busy surroundings. The theatre also introduced a developed fire protection system and the security system with numerous cameras installed across the space.
Those interested to benefit from the Rawabet’s facilities, can send an email to Orient Productions with the project details. In the near future, we will launch a communication channel that will be dedicated to receiving projects, ideas and comments related to the venue.

Townhouse Gallery reopens after two months, for no apparent reason