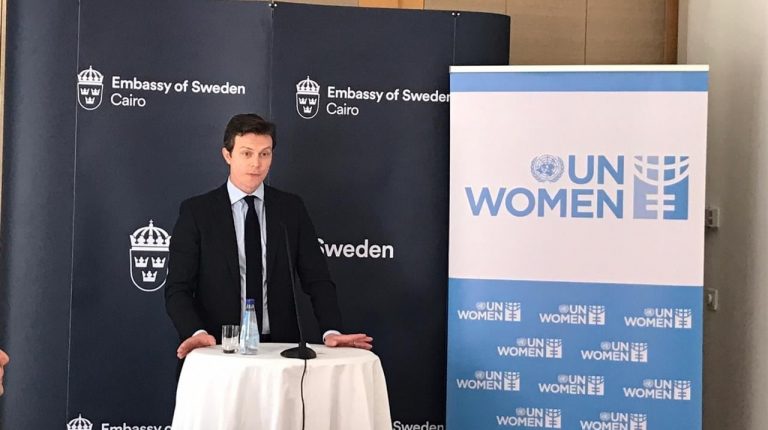 The Embassy of Sweden in Cairo has hosted an online WikiGap edit-a-thon in celebration of International Women’s Day 2021.

The content on Wikipedia influences and shapes readers’ view around the world, but it has a significant gender imbalance, as 80% of the content is about men.

The aim of WikiGap is to increase content written by and about women on Wikipedia, which serves as the world’s largest online user-generated encyclopaedia.

Speaking in a video message broadcast at the Edit-A-Thon’s launch, Swedish Minister of Foreign Affairs Ann Linde said, “WikiGap is about improving the visibility of women who have made important contributions in different fields, who can be role models and inspire others. It is about painting a more truthful picture of our world.”

For the fourth year in a row, the Swedish Ministry of Foreign Affairs conducted the WikiGap campaign in several countries around the world, including Egypt, to make the internet more equal.

WikiGap is a concrete example of Sweden’s feminist foreign policy, which aims to strengthen women’s and girls’ rights, representation and resources.

The Embassy of Sweden in Egypt has been advocating for gender equality for many years, working in partnership with the Egyptian Government, civil society and the UN.

During the last two years alone, the Embassy has hosted and participated in more than 25 gender focused events, in collaboration with Egyptian and international partners from the government, the private sector, and NGOs.

The focus of this year’s WikiGap was to highlight women leadership figures in Egypt and abroad. The Embassy of Sweden, in partnership Oriflame, will present prizes to the participants who contributed with the greatest number of good quality articles.

“Through identifying, celebrating, and increasing the visibility of women’s achievements, we can help create equality in our world,” said Dr Per-Axel Frielingsdorf, Chargé d’Affaires of Sweden, “Our WikiGap theme for this year is to highlight women leaders in Egypt, the Arab region and everywhere around the world.”