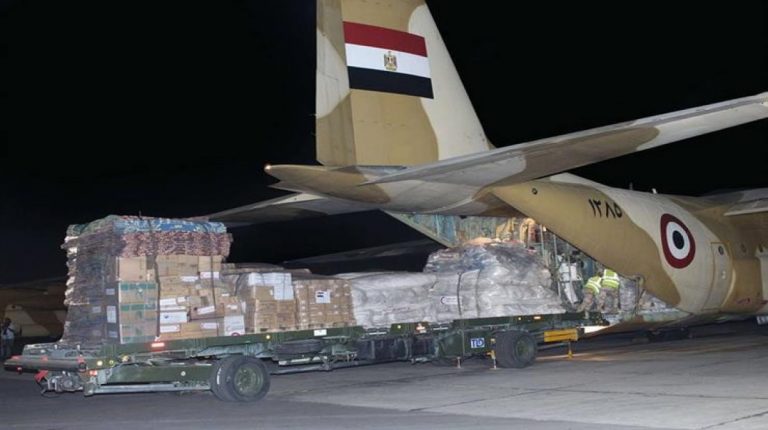 The Egyptian military has announced that a shipment of medical aid was sent to South Sudan as part of Egypt’s support for the crisis-torn country, according to an official statement.

The military added that the aid is part of the “implementation of the directives of President Abdel Fattah Al-Sisi, Supreme Commander of the Armed Forces, and within the framework of continued Egyptian support and solidarity with friendly and brotherly countries in various crises”.

Egypt has, since 2020, been sending several aid packages in the form of humanitarian aid to South Sudan, including food items. The aid has been directed at those affected by recent extensive flooding in Sudan and South Sudan.

For their part, South Sudanese officials praised the efforts made by Egypt to provide support to the people of the African continent.

In a statement, the officials expressed “full appreciation and thanks to the Egyptian political leadership for its continuous efforts to overcome all the challenges facing the people of South Sudan.”

The plane also included disinfectants and personal protective equipment (PPE) for medical staff, as well as large quantities of baby milk to help the East African nation overcome the pandemic.

In September 2020, the African Union (AU) Commission emphasised the importance of African solidarity with South Sudan.

The urgent call was made by the AU Peace and Security Council, which followed the Council’s recent meeting that focused on the current situations in South Sudan.

During the recent massive floods that swept the country in September, President Al-Sisi directed for the opening of an air bridge to Sudan and South Sudan.

This provided urgent aid to those affected by the floods, and included military transport planes carrying shipments of food items.

The Wednesday statement added that two military transport planes took off from Egypt to the King Khalid Airport in Riyadh, loaded with medical aid to be transferred to Yemen.

The statement added that the aid comes from national ties and Egypt’s firm stance towards its brothers and full solidarity with them in the face of adversity and crises.