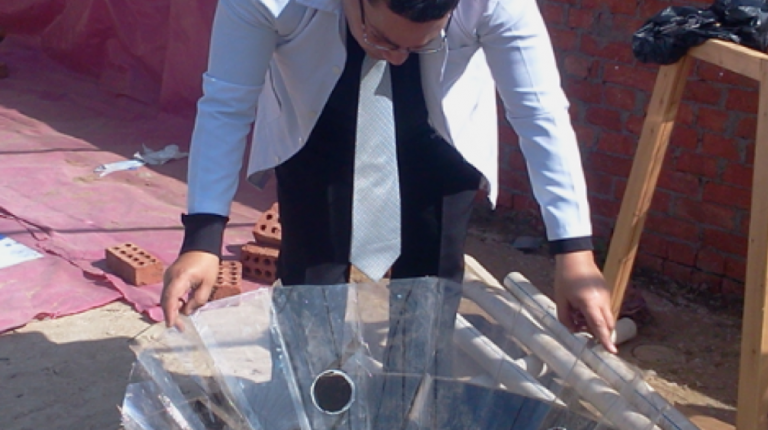 An Egyptian researcher has developed an innovative device for harvesting rain and evaporated water for use in floating agriculture.

Egypt has faced a major challenge in accessing the water it needs in recent years, with the problem only expected to increase in the future. This has been heightened by the expected impacts of the Grand Ethiopian Renaissance Dam (GERD), which Cairo fears will affect its share of the Nile River water.

This created the search for non-traditional sources of water, such as the development of a rainwater harvesting device to create water vapour for use in floating agriculture.

The device was prepared by Reda Mohamed Ali, Assistant Professor of Civil Engineering at the Coastal Research Institute, who obtained a patent from the Academy of Scientific Research and Technology (ASRT).

The technique of harvesting rainwater and reusing lost water through evaporation techniques is one of the unconventional methods that can be relied upon to provide a source of water.

It has been used to resolve the issue of large-scale water problems, especially since the device can be used to harvest evaporated water from the surfaces of salt lakes or from shallow beaches with calm waves, which occupy large areas of Egypt.

The importance of the device is due to the validity of the water produced for agriculture, in addition to the cheapness of the design’s cost. There is also a future possibility for its expanded use.

The water produced from the device has a salt content of only 5%, which means that it is freshwater with a purity of 95%.

According to Ali, the device can be used in the cultivation of medicinal and aromatic plants, even wheat and rice, but on a large scale so that a large return can be achieved.

“The idea came from a question of how we can benefit from the stagnant water and the waters of shallow lakes that evaporate at the end and turn the lakes into salt ponds, like the lakes of northern Egypt,” he said, “Some of these ponds are estuaries for industrial or agricultural drainage.”

The researcher said that the idea of the device’s work is based on the hydrological cycle when water vapour rises from water bodies and then condenses and falls in the form of rain.

The device consists of parts, including a lower part that causes water vapour, and a conical upper part made of semi-transparent plastic. Through a condenser connected to the evaporator, a temperature difference occurs between the upper and lower parts and then condensation occurs.

After the water condenses, this water is received through floating plastic containers with places designated for agriculture and places to reserve water. This is in addition to containers to receive rainwater in the device, store it and use it again to grow some medicinal plants, especially given their economic importance.

“In this device, floating square units comprising 16 circular units [and this is the proposal] have been made, with dimensions of 10 x 10 metres, and the circular units cover 78% of the water surface at the bottom of the device,” Ali explained.

The device can be used in both the summer and winter seasons. In the summer season, the device uses temperature and solar radiation to cause evaporation and then rain.

In winter, the device collects part of the rainwater according to its size and the needs of the plant grown in it. It also allows the passage of water in excess of its need so as to allow the plant to be fed throughout the year.

Regarding the energy required to operate the device, Ali said, “Since the device is designed to be ​​used in areas far from traditional energy sources, the device is powered by solar energy through the theory of the greenhouse, so that the solar radiation enters the transparent cone and does not go out again to be used in the simulation of the hydrological cycle in the device.”

He noted that the device can be applied on a large scale and for large areas for cultivation, and it can also be used by ordinary individuals.

This is particularly since potential users are not expected to face any technical problems or malfunctions because the innovation does not include any complex devices.

“The device will definitely be affected by dust storms, strong winds and waves,” Ali explained.

The researcher has not conducted an economic study on the application of the project on a large scale yet. He said that this depends on the size of the application and the materials used in the manufacture.

“The model cost me about EGP 2,000 and its diameter was about 120 cm, but the cost will depend mainly on the size of the unit designed from the device and the materials used in the manufacture of its parts, whether with plastic, fibre, ceramic, or wood,” he adds.

According to the researcher, the proposed model can be produced in sizes ranging from one metre to 10 metres, and it can be produced with fibre and installed with valves to pass water at a low cost. If the application is in a large area, the cost will be almost nothing compared to the profit.

The researcher seeks to make this device a national project in remote areas and threatened lakes.