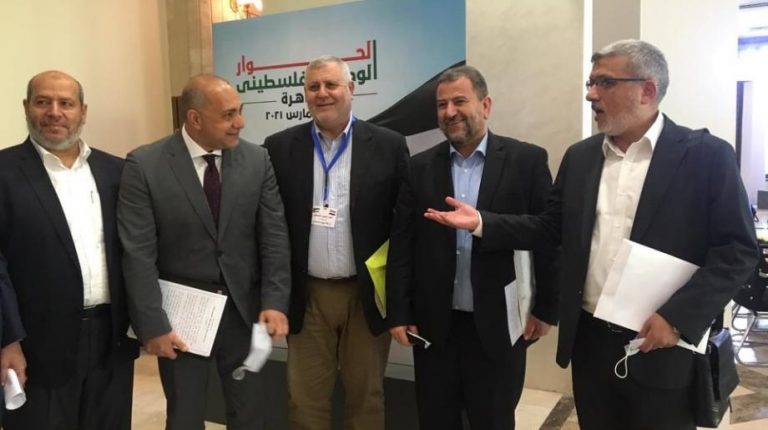 The Palestinian factions gathered in Cairo stressed, on Wednesday, the need to hold the upcoming Palestinian elections in Jerusalem, the West Bank and the Gaza Strip.

There should also be focus on addressing any obstacles to these elections, particularly in Jerusalem.

The remarks were made in final statement for the second round of Palestinian dialogue, which was held in Cairo on Tuesday and Wednesday. The dialogue was held to discuss the files related to the legislative elections, and the elections of the Palestinian National Council.

In the statement, the factions stressed the “legal and political unity of the Palestinian Territories”.

The statement added that the factions participating in the elections signed a charter of honour to confirm the conduct of the electoral process in all its stages. It also covered the transparency and integrity of the elections, and that the process should be dominated by honest competition between the competing lists.

The participants confirmed that the formation of the unified leadership for the comprehensive popular resistance has been completed. It has now been put into effect, according to the statement of the recent meeting of secretaries general, the statement added.

“The meeting discussed with high responsibility all national issues, the risks facing the Palestinian issue, and the holding of legislative, presidential and national council elections, based on the presidential decree issued on January 15, 2021,”the statement added.

The participants listened to the report of the Central Election Commission on the progress of the preparation of the legislative elections and agreed on solutions to the outstanding issues.

This would ensure the conduct of the electoral process in a transparent and fair manner that reflects the aspirations of the Palestinian people.

The meeting also discussed the mechanisms of the formation of the new National Council and the number of its members, the statement added.