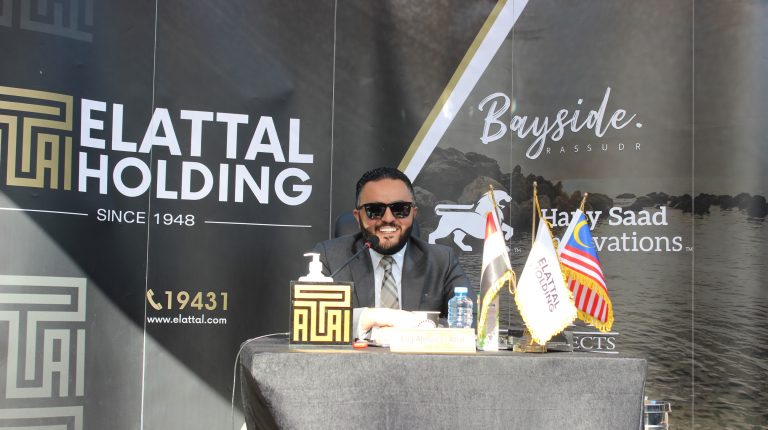 Ahmed El-Attal, Chairperson of Al-Attal Holding, has announced that the company’s latest project, Bayside in Ras Sudr, will be launched for sale during the Real Gate Exhibition, which will be held from 25-27 March.

Speaking at a press conference on Wednesday, El-Attal announced that construction works for the project started in early 2020, with EGP 1bn in investments.

Bayside extends on an area of 7 acres, and consists of 170 furnished, fully-serviced apartments, and a 40-room hotel. These have been designed to inspire a true Maldivian experience, with state-of-the-art facilities and services, in harmony with direct sea views available for all units within the project.

“El-Attal’s strategy focuses on developing real estate projects in different locations in line with Egypt’s development plans,” El-Attal said, “Ras Sudr in South Sinai is a promising destinations and a unique untapped investment opportunity, thanks to its picturesque nature, a God-given gift that is sufficient to make it one of the most attractive touristic destinations in Egypt.”

Moreover, he explained that Ras Sudr has witnessed major infrastructure developments recently, especially with new roads and tunnels built under the government’s initiative to develop and revive the entire Sinai Peninsula.

This will significantly reduce the time required to travel to the city, and will facilitate creating an exceptional investment opportunity, as well as a destination that attracts tourism to this area.

“Al-Attal Holding was keen to build Bayside with the finest quality in terms of planning, architecture, and interior design,” El-Attal added.

He revealed that the construction works have been concluded, and that Bayside is currently at the finishing phase. The entire project will be available for sale during El-Attal’s participation at The Real Gate Exhibition this month.

El-Attal plans to start the delivery phase during the fourth quarter (Q4) of this year, with EGP 500m of targeted sales for Bayside by the end of 2021.

For his part, Al-Attal Holding CEO Mohamed Al-Attal announced the launch of the fourth and final phase of “PARKLANE” in the New Administrative Capital (NAC) has taken place. He said that the project is mixed-use, and includes administrative and commercial units.

Mohamed Al-Attal declared that 85% of the first phase, 95% of the second phase, and 90% of the third phase have been sold. Moreover, the company was also able to sell over 27% of this project to foreigners. In addition, 50% of the construction of phase I is done, and is planned to be fully completed throughout this year, along with 15% of the second phase.

Construction for all four phases of PARKLANE is expected to be fully completed by the end of 2023.

PARKLANE is the company’s first project in the NAC, with EGP 4bn in investments.  The project is built on an area of 27 acres in the R7 area, featuring a total of 1,100 units, including duplexes, penthouses, and studios, along with administrative and commercial units.

ATTCON Construction, El-Attal’s construction arm undertaking the development of PARKLANE, has built a central mixing station with a production capacity of around 6000 sqm to cover all of the project’s needs.

It is worth mentioning that ATTCON, aside from building El-Attal’s projects, has achieved EGP 1.2bn in external contracts during 2020. It aims to achieve EGP 1.5bn-worth of contracts during this year.

Furthermore, Ahmed El-Attal noted that El-Attal Holding is currently working towards establishing a new company to join their group. It is set to take over the management and leasing of the fully serviced apartments in both projects at Ras Sudr and the NAC.

He said that the company has a facility management department under ATTCON Construction that has already undertaken many projects for foreign embassies in Egypt. The company is working on restructuring this department to establish a new company projected to launch during Q2 of 2021.