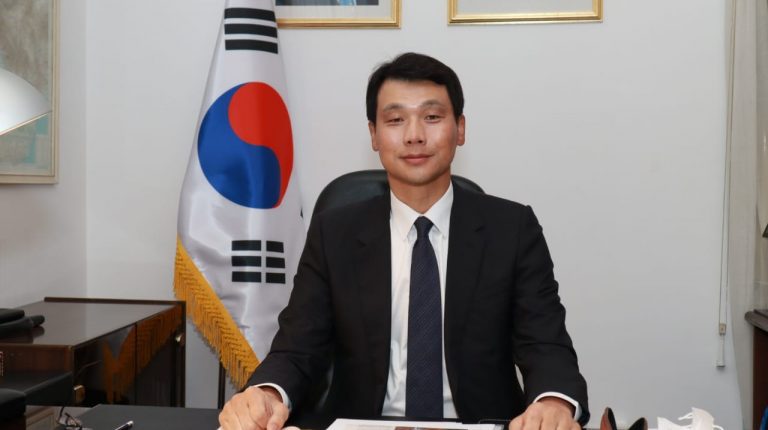 First of all, I would like to congratulate Daily News Egypt on its 15th birthday. As one of Egypt’s leading newspapers which I read every morning, Daily News Egypt provides useful information for not only Koreans in Egypt, but also Koreans living in Korea and who have interests in Egypt. I look forward to Daily News Egypt’s continued success in the next 15 years.

Last year, we celebrated the 25th anniversary of the establishment of diplomatic ties between Korea and Egypt. The friendship of the two countries has now come of age, ten years older than Daily News Egypt.

Moreover, we were delighted to receive a congratulatory message from President Abdel Fattah Al-Sisi, expressing his wish for further development of the bilateral relations on our National Day last year.

Over the last 15 years, there have been tremendous advances in our partnership in all areas. At the beginning, trade and investment between the two nations started at an insignificant level. Now Egypt is our largest export market in Africa, and the two-way trade volume has increased to around $2bn.

Currently, there are around 170 Korean business entities in Egypt, many of which are major companies spanning a wide spectrum of sectors, including electronics, transportation, energy, textile, construction, and services.

Among the leading examples are Samsung Electronics in Beni Suef, and LG Electronics in 10th of Ramadan. The ‘Made in Egypt’ products of these companies account for close to 90% of Egypt’s export in electronics.

Since last year, the entire international community has been facing a global health crisis, and Korea and Egypt have been no exception. Social distancing has become the new normal. Yet with the benefit of the excellent leadership of President Moon Jae-in and President Al-Sisi, our two nations are working together in overcoming COVID-19.Egypt has shown great resilience and was one of the few countries that succeeded in achieving positive economic growth last year.

Korea also has taken a number of measures to overcome this challenge and to return economic activities at the domestic level to normal. The Korean Government’s response has included a promise to build back better, with the ‘Korean New Deal’ launched by the Korean president in September 2020.

The new deal has three main pillars including the integration of digitalisation throughout the economy, the transition to green infrastructure, and stronger support for employment and social safety nets.

President Moon Jae-in’s visit to Cairo scheduled for last March, to celebrate the 25th anniversary and shape two countries’ vision for the future, had to be postponed due to the pandemic. However, COVID-19 has served to bring into greater focus on the importance of the bilateral cooperation.

There is a deeper resolve on both sides to maintain and nurture the collaboration. We share determination not to allow our precious plans and projects to be disrupted.

This was emphasised by the two presidents during the two rounds of their phone conversations last year in March and in October. I believe the Comprehensive Cooperative Partnership between our two countries, adopted on the occasion of President Al-Sisi’s historic visit to Korea in March 2016, will be upgraded to new heights through my president’s visit to Egypt in the near future, once the pandemic comes to an end.

For the 15 years to come, I am sure, there will be a promising collaboration between our two countries firstly in the economic realm. Considering Egypt’s large market and its expanded network through FTAs with various regions and countries, there is a promising opportunity for Korea and Egypt to work together to connect Asia, Africa and Europe by trade and investment utilising Egypt as a strategic hub.

In this connection, we have an aspiration to further build on the current success stories of Korean companies in Egypt. We are encouraging more Korean investment in Egypt and facilitating trade is one of the prerequisites to realise this.

Towards that end, we have been in discussions with our friends at the Egyptian Ministry of Trade and Industry to conduct a joint study on the feasibility of a possible trade and economic partnership agreement between our two countries.

The main objective of this agreement is to eliminate existing trade barriers while promoting industrial and investment cooperation. With this agreement, Korean companies will be able to explore the full potential of Egyptian market, while Egyptian businesses will have better access to technologies and production capacities of their Korean partners.

In particular, the Korea-Egypt Technological University in Beni Suef is a symbol of excellent cooperation on higher education and technical training between two countries. With its establishment in Beni Suef, Korea is supporting Egypt’s endeavours to supply a skilled industrial labour force.

Through this university, we link technical education with practical field training and job opportunities. There is great promise for a bright future ahead, with the graduates from this university working for Korean companies in Egypt such as Samsung, LG and many others.

Other projects are also being considered, to replicate the success of this university in other governorates, such as establishing a branch for Korea Advanced Institute for Science and Technology (KAIST) in the new Administrative Capital. We hope such projects can come to fruition in the near future.

Last but not least, people-to-people and cultural exchange will be decisive in the future of the ties between Korea and Egypt. There is a real affinity between our two countries which transcends the geographical distance and distinct cultural legacies.

Young Egyptian people love K-Pop, K-Dramas and K-Food. The high tide of the K- wave is contributing to a growing interest in the Korean language education in Egypt. Meanwhile, more and more Koreans become fascinated by the depth of Egyptian culture and the beauty of Egyptian nature. The number of Korean tourists visiting Egypt increased to 20,000 just prior to the pandemic.

This bonding between our peoples have continued to be deepened for the last 15 years. With this solid trust and friendship as a strong basis, I have every confidence that we will take greater strides forward throughout the next 15 years.