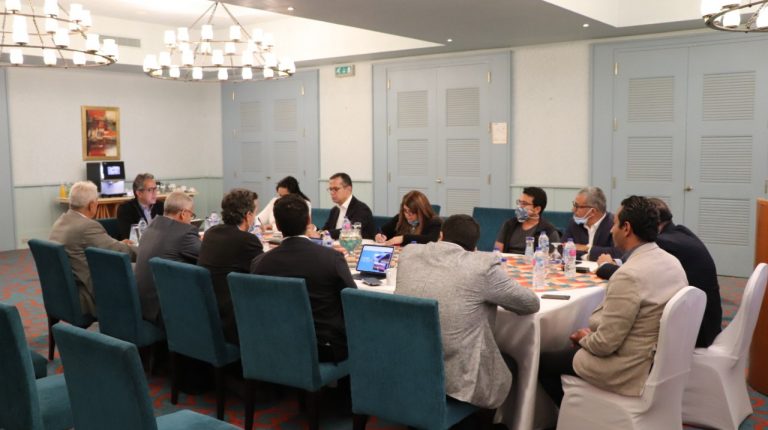 Egypt’s Minister of Tourism and Antiquities Khaled El-Anani has met with a group of Taba investors to discuss a range of issues relating to the tourism sector in Egypt.

During the meeting, the investors outlined their demands and proposals to support and increase the movement of inbound tourism, and discussed the challenges facing the tourism industry.

The meeting took place in the presence of Ghada Shalaby, Deputy Minister for Tourism Affairs, and Ahmed Al-Wasif, President of the Egyptian Tourism Federation (ETF).

It came during the minister’s visit to Taba city to attend an event organised by the South Sinai governorate to celebrate the 32nd anniversary of Taba’s return to Egypt.

During the meeting, El-Anani reviewed the problems facing investors in Taba and their proposals to develop tourism in the city. They also discussed mechanisms to revitalize domestic tourism.

The Minister said that the Egyptian Government spares no effort to develop the country’s tourism sector, as it is one of the most important pillars of the national economy.

He added that the government is removing all obstacles that the tourism sector faces, whilst providing the necessary support to revive this vital sector. He also emphasised that the private sector is a partner in the tourism sector’s success, and the real driver for its advancement.

El-Anani also referred to the initiatives, decisions, exemptions, incentives, and support granted by the government to support the tourism sector and its workers. These have been put in place to mitigate the impact of the novel coronavirus (COVID-19) pandemic since its start.

He stressed that Taba is a city that combines many different types of tourism, as it has a distinct tourist location. The city boasts picturesque beaches, untouched nature, and luxurious hotels, in addition to the Pharaoh’s Island, which contains the ancient Citadel of Saladin.

For their part, investors praised the new roads that had been built to smooth and facilitate access to the city, and the possibility of increasing services in the area. The two sides also discussed the operation of a number of flights to Taba Airport.

During the meeting, some of the problems facing the tourism sector in Taba were discussed, with proposals to resolve them. This came in addition to discussing proposals to revitalize domestic tourism to Taba.

In-person classes to continue at all universities in Egypt: Official