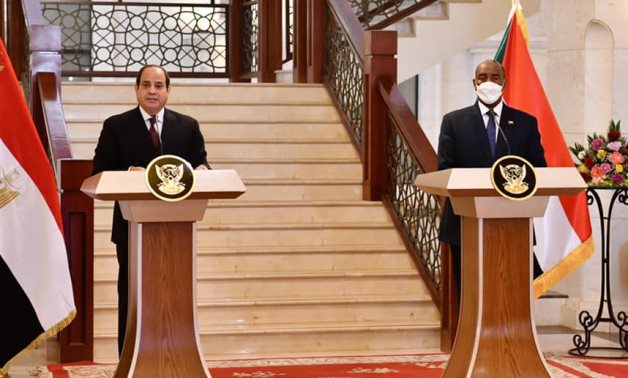 Eleven countries lie in the Nile Basin, but the relationship between Egypt and Sudan is very distinct and special, due to the geography that made them both downstream countries.

Like the nature of the river that goes through periods of flood and drought, the relationship between Cairo and Khartoum has a long history, including many years of growth and giving, and others that were scarce and dry.

In any case, there were red lines on which controversial problems would stop. This is what kept the privacy of that relationship in the face of all the challenges imposed internally and externally, that affect the fate of the people of the two downstream countries.

Today, we [Egypt] and Sudan are living together in an existential crisis in light of the Ethiopian intransigence that has crossed all red lines. This is because of Ethiopia’s reckless behaviour and its insistence on the second filling of the [Grand Ethiopian] Renaissance Dam (GERD) without concern for the repercussions and negative effects on Egypt and Sudan as a result of that step.

In the light of that, the visit of [Egypt’s] President Abdel Fattah Al-Sisi came to place each party in front of its responsibilities to act according to the supreme interests of all countries.

One of the most important results of the visit was, first, the announcement of Egypt’s support for Sudan’s position on the border dispute with Ethiopia in the Sudanese Al-Fashaqa region.

Egypt has taken this position, as all the facts support the Sudanese position and the position of its armed forces, after they were attacked by the Ethiopian army three times this year without any attack or a similar response by the Sudanese army.

It is also known that the territories belong to Sudan according to the border demarcation agreement signed in 1902. It is unfortunate that these events take place at a time when Addis Ababa embraces the African Union, which contradicts and harms this union, and threatens peace, national security, and the security of the Red Sea.

Second, announcing Egypt’s approval of Khartoum’s proposal to form a quadripartite committee, which includes the European Union and the United States, in addition to the African Union that will act as an umbrella to activate the Renaissance Dam negotiations, and the main objective of this committee is to push the negotiation path forward, and to help the three countries reach the desired agreement as soon as possible.

Egypt and Sudan rejected any unilateral measures by Ethiopia regarding the plans for the second filling of the GERD reservoir, as this threatens the Egyptian and Sudanese interests in particular.

The process of unilaterally filling without a binding agreement for the three countries poses a threat to Sudan’s dams and the security and safety of citizens who live on the banks of the Nile under the dam and their properties.

Finally, Al-Sisi affirmed Egypt’s support for the transitional period in Sudan, and its eagerness to make it a success after the formation of the Sudanese Sovereignty Council. This follows the signing of the constitutional document between the civilian and military components on 17 August 2019.

Cooperation between Sudan and Egypt is a necessity, and for the two countries, it is a political priority. This is especially in light of the circumstances surrounding the two countries, whether concerning the GERD, which represents a great challenge as it touches the necessities of life in the two countries, or what is happening in the eastern borders of Sudan.

In the latter, Addis Ababa seeks domination and external expansion, forgetting about its internal problems that require wise solutions that the current leadership cannot reach through its reckless policy.