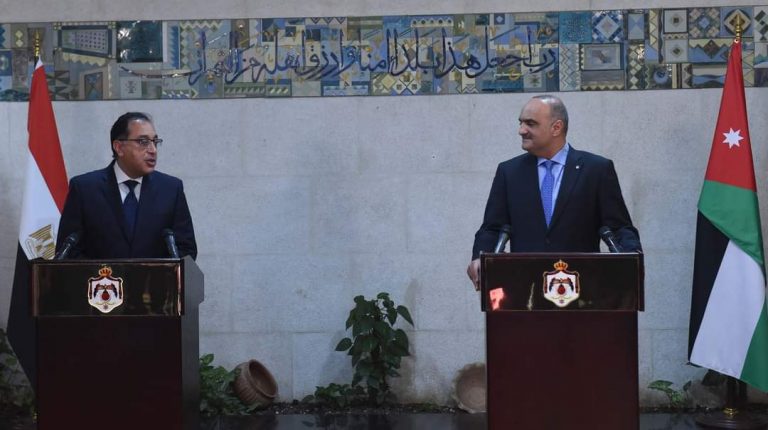 Jordan’s King Abdullah II has asserted his country’s support for all cooperation proposals with Egypt, which will achieve the interests of the two people.

The Jordanian monarch also hailed the strength of the cooperation between Egypt and Jordan as he received Egypt’s Prime Minister Mostafa Madbouly.

The remarks came during Madbouly’s visit to the Jordanian capital of Amman, on Tuesday, in order to take part in the 29th session of the Joint Egyptian-Jordanian Higher Committee.

Madbouly conveyed the greetings of President Abdel Fattah Al-Sisi to King Abdullah II, and briefed the King on the most prominent points that were agreed upon during the Joint Egyptian-Jordanian meetings. These agreements specifically relate to the electricity, health, transportation, and housing fields.

During the session, Madbouly asserted the abilities of both Egypt and Jordan in addressing the exceptional circumstances both countries are facing due to the novel coronavirus (COVID-19) pandemic.

The Egyptian Prime Minister stressed the importance of coordinating with Jordan, to find political solutions for issues of mutual interest.

He said that the two countries are working together to boost efforts in settling the Palestinian issue, based on the two-state solution. This is in establishing an independent Palestinian state based on the 1967 borders, with East Jerusalem as its capital.

Madbouly also applauded the care that Egyptian citizens working in Jordan received from the country’s government, referring to their effective contributions in various fields of work.

The Prime Minister confirmed that Egypt is fully supportive of Jordan, especially in its fight against the pandemic. He said that President Al-Sisi had directed for Egypt to meet the needs of the Jordanian Government in line with the former’s capabilities.

He affirmed the need to increase the volume of trade exchange between both countries and encourage mutual investments.

Meanwhile Al-Khasawneh, indicated that this session reflects the distinguished relations between both countries.

The Jordanian Prime Minister asserted the importance of cooperating to solve the Palestinian issue based on the two-state solution and establishing the state of Palestine.

He indicated that the tripartite cooperation mechanism between Egypt, Jordan and Iraq had witnessed many tripartite reciprocal visits to establish the principles of economic and commercial integration, especially in the field of energy and electricity.

Both Prime Ministers witnessed the signing of seven documents to enhance joint cooperation between Egypt and Jordan.