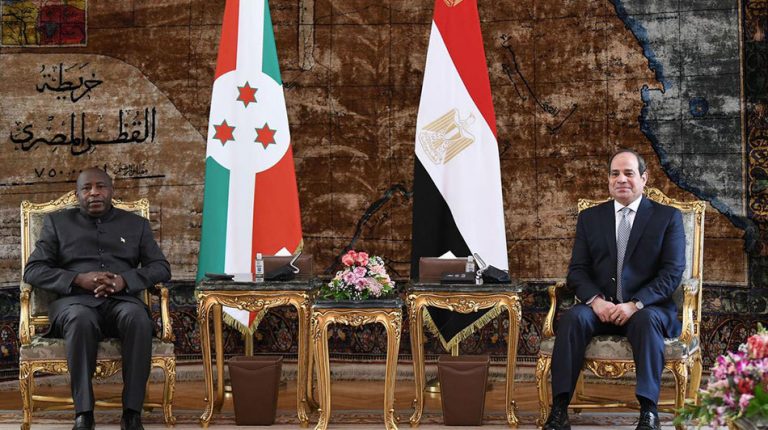 Egypt’s President Abdel Fattah Al-Sisi asserted, on Wednesday, that the River Nile is a “matter of existence” to all Egyptians.

Al-Sisi’s remarks came during a press conference with Burundi’s President Evariste Ndayishimiye, who arrived in Egypt, on Tuesday, for an official three-day visit.

“It is a great pleasure to welcome my brother His Excellency President Ndayishimiye and the delegation accompanying him to his second country, Egypt, on his first visit to Cairo, and we wish him and the accompanying delegation a good and fruitful stay,” Al-Sisi said.

He expressed his deep appreciation for the historical relations between Egypt and Burundi, pointing out that the two sides are holding intensive discussions on a number of bilateral and regional issues of mutual interest.

Moreover, Al-Sisi stressed Egypt’s keenness to develop and deepen all existing forms of cooperation between the two countries, which in recent years have witnessed many positive developments, in order to achieve the interests of the country’s peoples.

He affirmed Egypt’s readiness to develop this cooperation that achieves development goals in the two countries, at the level of trade and investment exchange.

“We also agreed to intensify cooperation in the field of transferring Egyptian expertise, providing technical support, and building Burundi’s capacities, by continuing the training programmes offered by the Egyptian Agency for Partnership for Development in various sectors,” Sisi added.

On the issue of the Grand Ethiopian Renaissance Dam (GERD), the two leaders discussed the developments in this regard.

“We reviewed the developments in the issue of the Renaissance Dam as an existential issue affecting the lives of millions of Egyptians,” Al-Sisi noted.

He reaffirmed “the need to reach a binding legal agreement as soon as possible that regulates the filling and operation of the dam, away from any unilateral approach that seeks to impose a fait accompli and ignore the basic rights of peoples”.

Al-Sisi and Ndayishimiye also discussed ways to enhance the existing cooperation between the two countries in the field of water resources and irrigation. The discussions included a review of joint efforts to maximise the sustainable utilisation of River Nile resources.

This will make the river a source of cooperation and development as a lifeline for all the peoples of the Nile Basin countries.

Both Presidents also witnessed the signing of a number of Memoranda of Understanding (MoUs) between the two brotherly countries in six different fields.

The MoUs were signed to enhance cooperation in media, education, tourism, and culture, in addition to an agreement for integrated management of water resources in Burundi. The agreements also covered the mutual exemption of entry visas for the holders of passports to both countries’.

This is Ndayishimiye’s first official visit to Egypt. During his visit, he had the opportunity to outline his country’s great appreciation for its long and distinguished historical relations with Egypt. He had also affirmed his country’s keenness to develop these relations in various fields, especially trade exchange and economic cooperation.

Ndayishimiye explained Burundi’s keenness to maximise the technical support Egypt has provided to Burundi, as well as obtaining the Egyptian companies’ support to carry the infrastructure projects in the country.

The Burundian President has also hailed Egypt’s pivotal role to maintain peace and security in Africa. He asserted that role was reflected in Egypt’s support for the unity and sovereignty of Burundi in all international and regional forums.