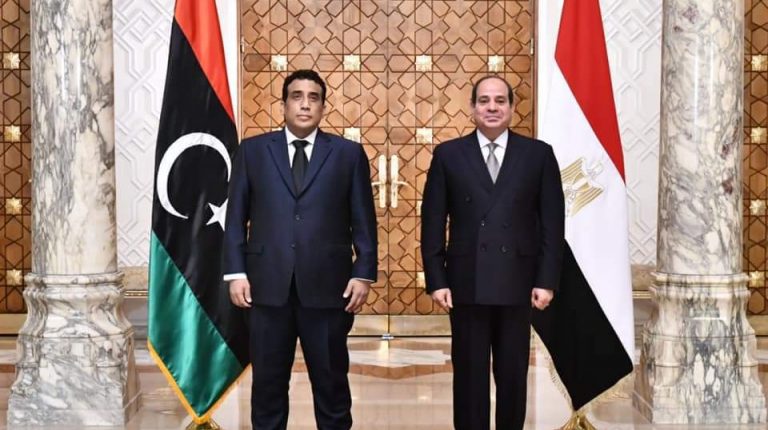 Egypt’s President Abdel Fattah Al-Sisi stressed, on Thursday, his country’s support to the newly elected executive authority in Libya, and all bilateral, regional, and international forums that work on holding general elections in the neighbouring country by the end of this year.

Al-Sisi’s remarks came during his meeting with Chairperson of the Libyan Presidency Council, Mohamed Al-Manfi, in Cairo where both leaders discussed bilateral cooperation, according to Egyptian Presidency Spokesperson Bassam Rady.

The Egyptian President affirmed the Egyptian position regarding the Libyan situation, which aims at achieving the supreme interest of the Libyan state in the first place. Al-Sisi pointed out that Egypt seeks to preserve the integrity of Libyan territories, restore security and stability of the country, rebuild a unified national army, stop foreign interference, and end the presence of mercenaries and foreign fighters.

Al-Sisi said that Egypt is ready to provide its expertise in governance to the Libyan government, in order to recover the state institutions.

For his part, Al-Manfi expressed his sincere appreciation and gratitude for the Egyptian support to Libya since 2011, lauding Egypt’s leading role, and its tireless, sincere and continuous efforts in supporting its brothers in Libya.

“Egypt has always been the most likely factor in activating and supporting efforts to settle the Libyan crisis in various political, military, and economic tracks,” said Al-Manfi.

He thanked Egypt’s President and people for standing by their Libyan brothers in managing the transitional stage.

The meeting witnessed a review of the prospects for cooperation and coordination between the two brotherly countries during the coming period, in terms of qualifying Libyan cadres in various fields, as well as transferring the Egyptian development experience to Libya.

It was agreed to intensify consultations and mutual visits between senior officials from both sides during the coming period.