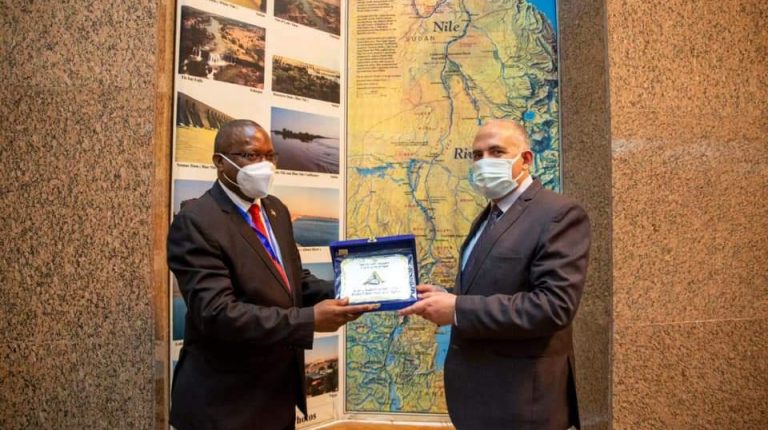 Abdel-Aty expressed his ministry’s aspiration to work with Burundi to achieve sustainable development in the water resources field, the Ministry of Water Resources said on Thursday.

Earlier on Wednesday, Egypt’s President Abdel-Fattah Al-Sisi and his Burundian counterpart Evariste Ndayishimiye witnessed the signing of a Memorandum of Understanding (MoU) between the two countries in the field of integrated water resources management.

During the Thursday meeting, the two ministers agreed to activate the MoU, as Egypt will be responsible for conducting a number of technical studies to establish dams to collect rainwater in Burundi, in addition to providing Burundi with Egyptian expertise in the field of groundwater.

It was agreed to hold virtual meetings between the officials of the two countries to identify the needs of the Burundian side.

They have also agreed that an Egyptian research team would visit Burundi to conduct a master plan for managing the water resources in Burundi, in addition to identifying the problems facing the water sector.

Speaking about the Grand Ethiopian Renaissance Dam (GERD), Abdel-Aty asserted Egypt’s keenness to complete the negotiations, confirming Egypt’s constants in preserving its water rights and achieving benefit for all parties involved in the GERD issue.

He asserted that Egypt aims to achieve a legal and binding agreement, meeting the aspirations of the three countries of Egypt, Sudan and Ethiopia for development.

Abdel-Aty explained that the GERD impact on the Nile River’s waters is considered one of the major challenges facing Egypt, especially in light of the unilateral measures taken by Ethiopian regarding filling and operating the Dam.

The Egyptian Minister had also reviewed the Egyptian efforts to support cooperation with the Nile Basin countries, as his Ministry has constructed many rainwater harvesting dams and underground drinking water stations to provide clean drinking water in remote areas using solar energy technology in a number of underground wells to allow their sustainable operation.

The Ministry had also implemented a number of projects to clean waterways and protect people from the dangers of floods, in addition to establishing many fish farms.