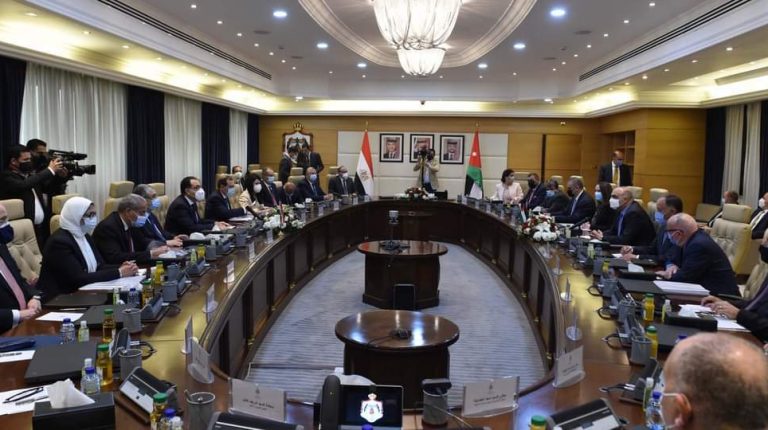 During the meeting, the ministers from the three countries discussed the results of the previous meetings that took place, the joint cooperation projects that are proposed for implementation and the developments in each area of cooperation.

Egypt, Jordan, and Iraq seek to reach final decisions on the MoUs and joint agreements to put into practice the proposals for strategic integration and economic and development cooperation.

There were discussions of the efforts of the three countries to activate cooperation and strategic integration in many areas, including the industrial sector by maximizing joint relations across industries; including the pharmaceutical, veterinary, leather and chemical industries, as well as the rehabilitation of Iraqi factories.

The Ministers also looked into the steps that have been implemented in the framework to overcome any obstacles that could arise, while discussing the final details. Considering the political will and consensus that exists between the three governments, this will be reflected in the strengthened cooperation across commercial and industrial sectors.

The Ministers also discussed the trade relations between the three countries, proposing the export of Egyptian and Jordanian products to Iraq without trade barriers to stimulate the exchange relations.

The extensive meetings also examined the proposed cooperation projects in the energy and electricity sector. These projects are expected to enhance electrical interconnection and achieve integration in the energy and petrochemicals field, alongside oil and natural gas projects.

The meetings also included the discussions of the agricultural sector, covering food security and establishing logistical areas and regional centers where trade exchange of agricultural products can occur between Egypt, Jordan and Iraq.

The involved ministers also touched on transportation projects in terms of transporting goods and joint cooperation in the housing, and reconstruction and urban development.