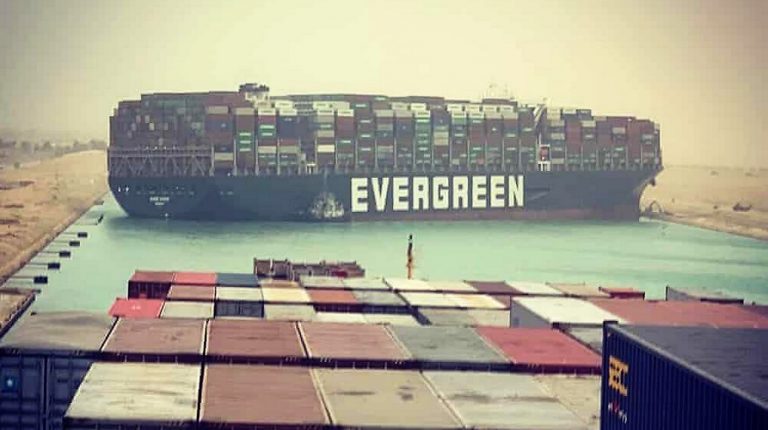 Admiral Osama Rabie, Chairperson of Egypt’s Suez Canal Authority (SCA), on Thursday announced that they “temporarily suspended navigation” through the waterway, as efforts to free a giant container vessel trapped on the Canal’s parallel corridor.

The Ever Given vessel, owned by Taiwanese marine company Evergreen, ran aground at the Suez Canal’s 151 Km mark, on Tuesday, reportedly due to low visibility believed to be caused by a strong sandstorm and 40-knot winds, halting marine traffic in one of the world’s busiest shipping routes.

Salvage and refloating operations are still ongoing, with bigger equipment expected to arrive to help dislodge the stranded ship.

Eight giant tug boats have been attempting to re-direct the vessel, which is 400 metres long, 59 metres wide, and can carry up to 224,000 tonnes.

Rabie said, on Wednesday, that about 13 vessels were transited from Port Said, and that they were expected to continue their transit through the Canal after the floatation works of the grounding vessel.

However, an alternative scenario had to be adopted; which entailed those vessels dropping anchor in the Bitter Lakes waiting area, until navigation could be fully resumed.

The floatation efforts included towing and pushing the grounding vessel using eight large tugboats; the largest of which is BARAKA 1 with a towing power of 160 tonnes.

The ship, sailing under a Panama flag, was en route to Rotterdam in the Netherlands lodged sideways, according to the SCA, the body that oversees the international trade route.

After the vessel is freed, it will likely be towed to Suez city for technical assessment before it is allowed to complete its trip.

The stranded ship delayed the passage of ships including tankers carrying oil, causing oil prices to increase by around 5%.