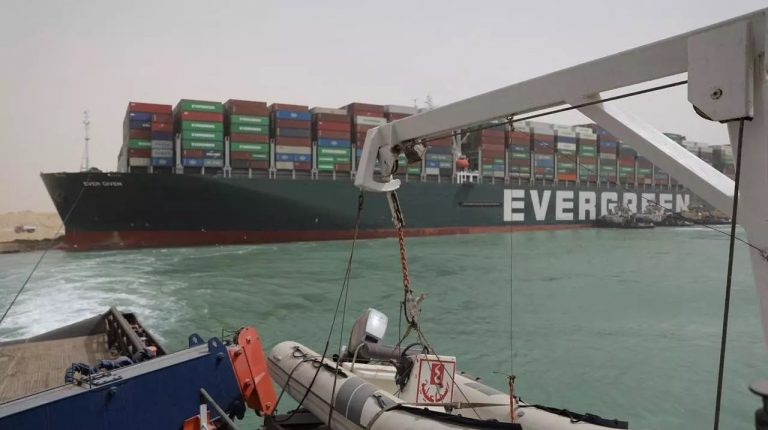 A total of 321 vessels are waiting to pass through Egypt’s Suez Canal but are being provided with all needed logistics, according to Osama Rabie, Chairperson of the Suez Canal Authority (SCA).

Speaking at a press conference, on Sunday, Rabie outlined the efforts to re-float the giant Ever Given container ship which has been blocking the strategic canal since Tuesday.

On 23 March, the massive Ever Given container ship ran aground and became lodged across the Suez Canal, blocking passage through a vital waterway for global trade.

It is unclear when the ship will be re-floated and the canal will reopen, raising the prospect of further delays to already strained supply chains, particularly for European manufacturers and automakers, a credit negative.

He gave assurances that no casualties or pollution have been recorded due to the accident, adding that the accident rate in the Suez Canal is almost 0%.

He also said that the accident involving the Ever Given occurred at the southern entrance to the canal, 35 km from Suez.

Rabie added that if the same problem had occurred in the canal’s New Corridor, it would have been easily solved.

He said that when the Ever Given ran aground, the wind speed was recorded at about 40 knots, although it was not the only reason for the accident. He noted that, on the same day that the vessel started its route down the Suez Canal, 12 vessels had previously passed through the waterway from the south, with 30 others from the north.

Rabie also said that no primary reason could be identified for the accident, unless an investigation is held.

“The Authority decided to close the shipping lane on Thursday, while on Wednesday, 13 vessels passed through the Suez Canal from the north,” he noted.

Rabie said that any premeditation in the ship’s stranding has been ruled out, and investigations will take place to clarify the truth. He also said that 14 tugboats are taking part in the rescue mission, and that progress is noted.

The SCA Chairperson noted that it is difficult to determine when the container ship saga blocking the Suez Canal will be resolved.

“We have great capabilities at the Suez Canal Authority, and are working to increase and develop them, whilst also having the authority’s mentors who are of the highest competence,” he said.

Rabie offered his thanks to those countries that have offered assistance, including the US and China, mentioning that the authority is studying these offers.

He gave assurances that the work on re-floating the ship is continuing, and that if help is needed. This will be done in agreement with the Dutch salvage company, Schmit Salvage, which has been hired to help remove the ship.

Moody’s has revealed that it does not expect significant disruption to Egypt’s B2 stable balance of payments from a sovereign perspective, as a result of the Suez Canal blockage.

It pointed out, in its latest report, that the Suez Canal receipts amounted to almost 2% of GDP on average before the novel coronavirus (COVID-19) pandemic, providing a significant contribution to total current account receipts.

“While declining to 1.3% of GDP during the acute phase of the pandemic, Suez Canal receipts have proven more resilient than other cross-border services, such as travel receipts,” Moody’s said, “A temporary disruption will not materially change our expectation of a return to pre-crisis canal receipts as global trade recovers.”

Moody’s stated that, depending on how global and regional volume is calculated, it estimates that the canal’s temporary closure affects around 10-15% of world container throughput.

It mentioned that the implications of delays for global supply chains would, under normal circumstances, not be a big issue. However, very high consumer and industrial demand, a global shortage of container capacity, and low service reliability from global container shipping companies are already causing long delays.

This has made supply chains highly vulnerable to even the smallest of external shocks. In that context, the timing of this event could not have been worse.

“Ships that were about to enter the canal will soon need to decide whether to turn back and use the alternative, longer route around the Cape of Good Hope,” Moody’s added, “That would add around 10 days to their journey compared with the main route that includes the Suez Canal.”

The agency mentioned that the effect of delays on individual sectors is hard to quantify because of the uncertainty on how long the canal will be blocked. However, it believes that Europe’s manufacturing industry and auto industry, including auto suppliers, will be most affected.

It explained that this is because they operate “just-in-time” supply chains, meaning they do not stockpile parts, and only have enough on hand for a short period, and source components from Asian manufacturers.

Moody’s said, “Even if the situation is resolved quickly, port congestion and further delays to an already constrained supply chain are inevitable.”

It added, “Alternative modes of transportation are more or less out of the question, because airfreight capacity is already tight owing to the COVID-19 pandemic, and rail transportation between China and Europe is very limited.”

Meanwhile, Moody’s said that for container shipping, the effect is credit neutral. For carriers diverting their vessels around Africa instead of going through the Suez Canal fuel costs will increase. However, spot freight rates will most likely increase or at least stop decreasing from their currently very high levels.

As a reference, Moody’s said that around 50% of the Asia-Europe volume is shipped at contracted rates which offer little flexibility to offset increased costs due to external events.

Russia’s Gazeta newspaper said that the cost of sea freight has jumped dramatically due to the congestion of cargo ships in front of the Suez Canal, after navigation was disrupted due to the stranded container ship.

According to a Bloomberg report, the ship’s stranding in the Suez Canal will delay the delivery of oil products worth about $10bn, which may affect oil prices in global markets.

In the event that ships decide to sail using the alternative route through the Cape of Good Hope, sailing time will increase by 9,650 km, meaning that the cost of transporting goods will commensurately increase by at least $300,000

Oil prices rose by over 4% on Friday, due to fears that the Ever Given’s impediment of navigation movement in the Suez Canal could take weeks, which could put pressure on supplies of crude and refined products.

This constitutes a rebound from a sharp drop in the previous session, against the backdrop of fears that demand will be affected as a result of new lockdown measures linked to the coronavirus in Europe.

Brent increased 0.1% over the course of the past week, while West Texas Intermediate was down 0.7%, its third consecutive weekly loss.

Meanwhile, the International Maritime Organization (IMO) has given assurances in a press statement that it has been closely monitoring the incident involving the MV Ever Given.

“I offer my encouragement to the Egyptian Authorities, as well as the salvers, tug and dredger operators, and all other parties, who are working tirelessly to safely re-float the ship and resume transit through one of the world’s busiest maritime trade routes as soon as possible. I appreciate the efforts of every individual involved,” said IMO Secretary-General KitackLim.

He added that he is aware of the implications of the temporary closure of the canal, asking for patience from stakeholders across the supply chain. This is so that all parties can work to ensure that the ship, its crew, its cargo, and the environment remain protected.

Lim noted that he looks forward to receiving information from the investigation into the incident, so that the IMO can act on any appropriate recommendations derived from the findings.

Widespread facemask use is vital to counter COVID-19 as lockdown ends: Scientists