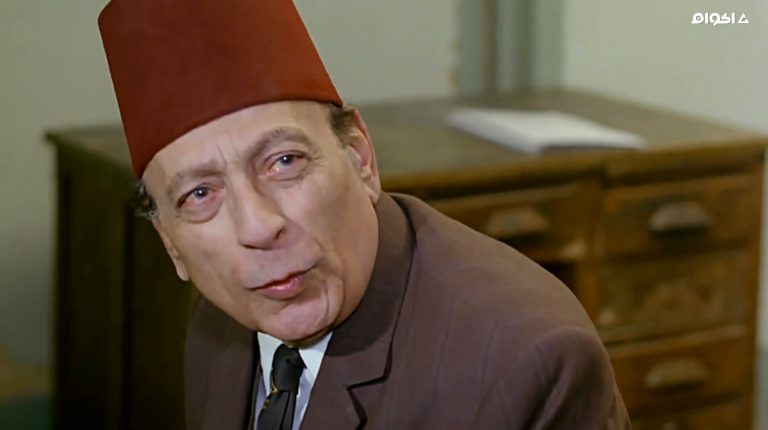 Many remember legendary Egyptian actor Mahmoud El-Meligy’s historic “And you want me to win it?” monologue in Youssef Chahine’s Alexandria Why (1979), as he is trying to convince a revolutionary activist that he should hire him as a lawyer.

While the activist, played by another iconic actor, Ahmed Zaki, does not believe in the justice of the court, and the judicial system in general, the nihilist lawyer is also critical of the whole system but timidly so. It is he that shows a defeatist stand that is not hopeful of any change.

Discussing fatherhood in Youssef Chahine’s films can fill many more articles and maybe books, but for the sake of this article, I will try to discuss El-Meligy’s depiction of a father in three of Chahine’s films: Alexandria Why (1979), An Egyptian Story (1982), and The Return of the Prodigal Son (1978).

We can argue that Chahine’s films are a place where masculinity, motherhood, religion, and nationalism are contested. The depiction of the strong-willed, decisive, and leading fatherhood is also contested.

An example of this is how the masculinity of the revolutionary well-built peasant, played by El-Meligy in The Land (1969) was smashed when he was arrested and forced to shave his moustache.

Although the famous scene lacked any dialogue, El-Meligy’s facial expressions were enough to illustrate how oppression can affect people, particularly men, in a patriarchal society where men constantly brag about their pride.

One also can argue that the fatherhood figure, not necessarily Gamal Abdel Nasser’s, was shaken following the 1967 defeat. The idealist dreams of a saviour father who will come to save the devastated country/family have no longer found an attractive place in the intellectual life of many.

In what many called the musical tragedy, The Return of the Prodigal Son, El-Meligy plays the grandfather whose family is in dire straits.

While many may use the film’s release date to theorise on how it predicted the crack among Arab countries, the lead character Mohamed Madbouly’s family, with its different characters, show the thesis of the film: there is no hope for recovery, illustrated in the effects of the 1967 defeat on the Egyptian society.

El-Meligy, who plays the weak and marginalised elder in the family, is a passive observer of the crisis who sees the bad deeds taking place, including rape, oppression, and dishonesty. Despite all of this, he stays quiet.

The father figure is defeated, and cannot give orders anymore or inject hope into anyone. The only use for him is to incite the older generations to leave Alexandria and never look back. It is poignant that Alexandria is Chahine’s favourite city, where dreams can be reborn away from the past and toxic disputes of the family.

In the film, El-Meligy plays Chahine’s father, an old lawyer who likes fishing and patience, and who has been looking for quietness and peace all his life, even if this quietness can make him uncomfortable.

Focusing on a precocious adolescent whose dreams and colourful attempts to become an actor unfold against the vivid backdrop of Alexandria during World War II, the film shows El-Meligy again as a weak figure that is controlled by his wealthy mother-in-law.

This weakness is not an apathetic one, but rather has a buried understanding of how the world works, and how injustice is infested in society. El-Meligy’s character might be revolutionary in his way, but not in a position to be admired by the young son.

The father is not the centre of the film, but understanding how the protagonist, Chahine’s alter ego, is planning to travel to the US to study acting, one has to see how he was defeated at home and how he was alienated from his family.

This alienation from the family was explained in An Egyptian Story (1982), as Chahine clarifys the origins of this defeatism that the father brought to the family. In this film, which is very private and critical, he exposes the hypocrisy of families, religious institutions, the film industry, and the state, regulating the culture scene.

Chahine fully exposes the family, all their misgivings and reactionary behaviour. He plays his alter ego Yehia, who gained international fame in Europe only to discover that, as in Egypt, the film is as much commerce as it is art.

His heart fails him, and he has to be operated on. As he is going through the operation, his mind (and heart) starts to put the family on trial, hoping to point fingers at the perpetrators who failed him and his heart.

We discover that the father agreed to marry his daughter to a much older man, so he can provide a prosperous lifestyle for the whole family, one of the many ‘crimes’ that are mentioned in the virtual trial that takes place while Yehia is in the operation.

In this film, however, Chahine was more accepting of what happened to him in the past. El-Meligy’s character is still a weak father, but finally, one that Chahine can forgive, to go on with his life.