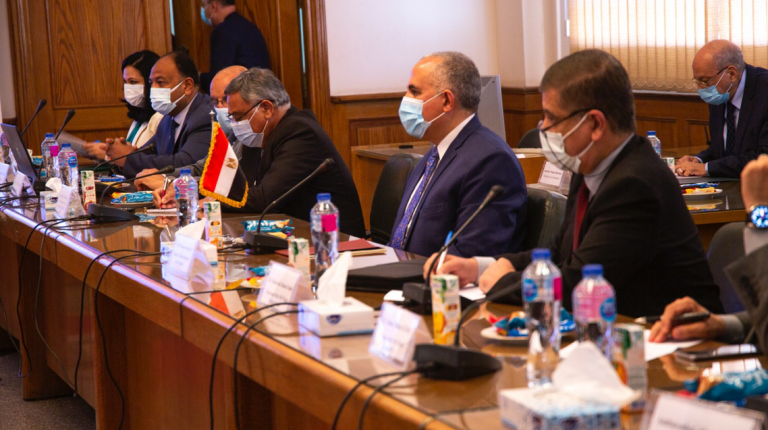 The meeting sought to discuss the current position of the negotiations on the Grand Ethiopian Renaissance Dam (GERD). The participants also discussed ways to re-launch stalled talks with the aim of reaching a fair and legally binding agreement to fill and operate the dam.

During the meeting, Abdel Aaty reviewed the path of negotiations over the past few years, and Egypt’s clear desire to reach a fair agreement to all parties. He confirmed his country’s constant requirement of preserving its water rights.

Abdel Aaty reiterated Egypt’s full support for the Sudanese proposal calling for the formation of an international quartet, which will be led by the Democratic Republic of the Congo (DRC).

It will see the additional participation of the US, the EU, and the United Nations (UN), and will mediate between the three countries involved in GERD negotiations, namely Egypt, Sudan, and Ethiopia.

The Egyptian minister indicated the importance of effective and serious negotiations to maximise the chances of their success.

He stressed that the unilateral measures taken by the Ethiopian side with regard to filling and operating the dam will result in significant negative repercussions on Egypt and Sudan.

Abdel Aaty said that these measures make this dam one of the current major challenges facing Egypt, at a time when the country suffers from severe water scarcity matched by an abundance of water in Ethiopia.

The two sides discussed the ongoing efforts to re-launch negotiations to reach an agreement on filling and operating the massive Ethiopian Dam.

The US envoy’s visit comes as part of his tour to the region that includes Egypt, Sudan, the current AU chair the Democratic Republic of the Congo (DRC), and Ethiopia. During his trip, Booth aimed to consult on ways to advance the negotiating process in the controversial project.

Loza stressed the need to reach an agreement on filling and operating the GERD as soon as possible, and before Ethiopia begins the implementation of the second phase of the filling. This will ensure that Egypt and Sudan are not adversely affected by the filling process, particularly relating to water access.

It also involves the US, the EU, the AU, and the UN, who will act as mediators between the three countries.

Loza stressed the importance of the negotiations being both effective and serious, to maximise their chances of success.

This would enable the three countries involved in the negotiations, namely Egypt, Sudan, and Ethiopia, to reach a fair, balanced and legally binding agreement. This will, in turn, help achieve their common interests, and preserves Egypt’s rights and secures its water interests.