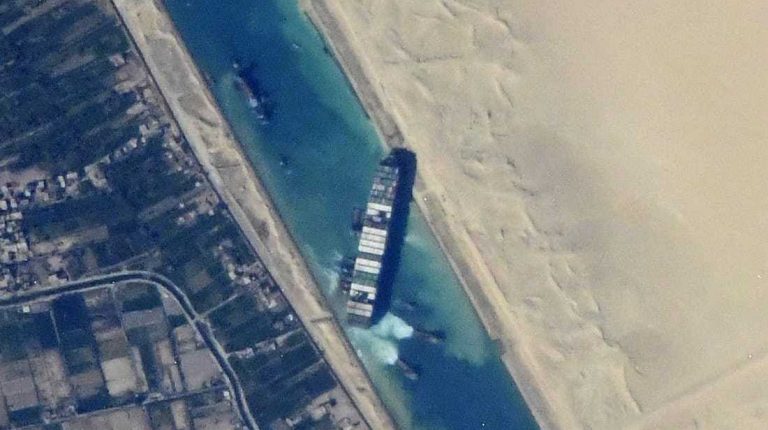 Egypt’s President Abdel Fattah Al-Sisi ordered, on Sunday, for preparations to commence in the unloading of the massive Ever Given shipping vessel, which has been stuck in the Suez Canal since last week.

In a statement, the Suez Canal Authority (SCA) said that the process of unloading the cargo currently being carried by the vessel will take place if dislodging efforts fail.

Also on Sunday, the Egyptian authorities provided more tugboats to the ship, as part of the attempts to reopen the canal.

SCA Chairperson Lieutenant General Osama Rabie said that the ship’s rudder has moved 30 degrees in each direction. He expected that the cargo could be moved by Sunday evening, but the director of the Dutch company leading the re-floatation process expected the ship to be released by Monday if the tide continues.

The MarineTraffic and VesselFinder applications said two tugboats, the Italian-flagged Carlo Magno and the Dutch-flagged Alp Guard, were on their way to the Suez Canal to help the salvage operation.

Rabie said that the results of the dredging work by “Mashhour”, one of the authority’s dredgers, have so far reached 27,000 cbm of sand, at a depth of 18 metres. He pointed out that the ship had moved 4 metres.

He added in media statements that the dredging work continues to remove the sand surrounding the bow of the vessel to facilitate the floatation process. This comes alongside pulling manoeuvres by the authority’s tugs at times commensurate with the tide and the direction of the winds.

Moreover, Rabie noted that the high winds have played a relative role in the ship’s stranding, indicating that the investigations are not excluding the hypothesis of human or technical error.

He also stated that the daily losses at the Suez Canal, one of the world’s most important shipping routes, are between $13-14 m.

A total of 321 vessels are waiting to pass through the Canal, and are being provided with all needed logistics, Rabie said.

On 23 March, the massive Ever Given container ship ran aground and became lodged across the Suez Canal, blocking passage through the vital international trade waterway.