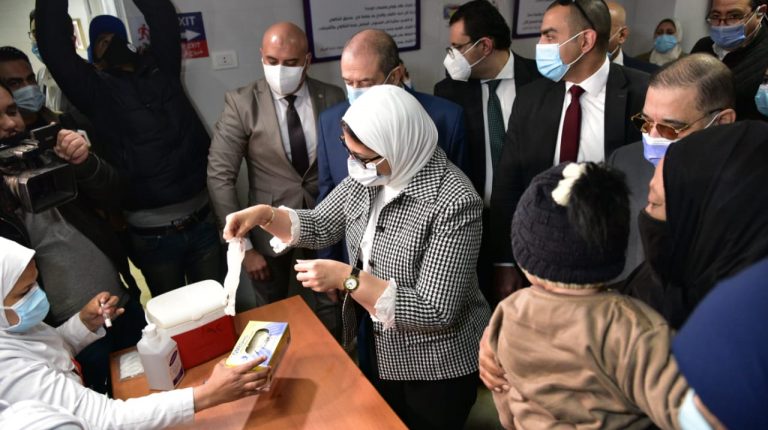 Egypt’s Minister of Health and Population Hala Zayed announced, on Sunday, the launch of the second phase of the nationwide vaccination campaign against Poliomyelitis.

The campaign, which is free of charge to children aged between birth and five years of age, was launched from the Asmarat Medical Centre and will run from 28-31 March.

Zayed confirmed that Egypt has successfully obtained 38.2 million doses of the monovalent “SABIN” vaccine against polio, despite the current challenges that some countries are facing in obtaining this type of vaccination.

Egypt obtained the doses in cooperation with the World Health Organization (WHO) and the United Nations International Children’s Emergency Fund (UNICEF), to ensure that it remains polio-free.

The minister added that children between the ages of one-day-old and five years will be vaccinated with two consecutive doses of the monovalent vaccination through the implementation of two campaigns.

The vaccination aims to raise community immunity against polio, as a pre-emptive step in conjunction with the outbreak of the disease in a number of neighbouring countries in the Eastern Mediterranean Region.

“Egypt has a strong system of basic vaccination programmes, surveillance and investigation of epidemic diseases that contributed to keeping Egypt free from polio, according to what was announced by the WHO in 2006,” Zayed said.

According to a statement from the Ministry of Health and Population, the nationwide campaign targets the 100% vaccination of the 16.7 million Egyptian children targeted, as well as the 17,100 non-Egyptians residing in the country.

Vaccination will be carried out between 8:00 and 17:00 by fixed teams at over 5,400 health offices, units, and medical centres. This is in addition to mobile teams located at major squares, train and metro stations, and next to mosques, churches, clubs, markets, bus and car stops.

Egypt’s last recorded case of poliomyelitis was recorded in 2004, according to Alaa Eid, Head of the Preventive Medicine Sector. He added that the Ministry of Health and Population is conducting annual vaccination campaigns to ensure raising the immunity of children.