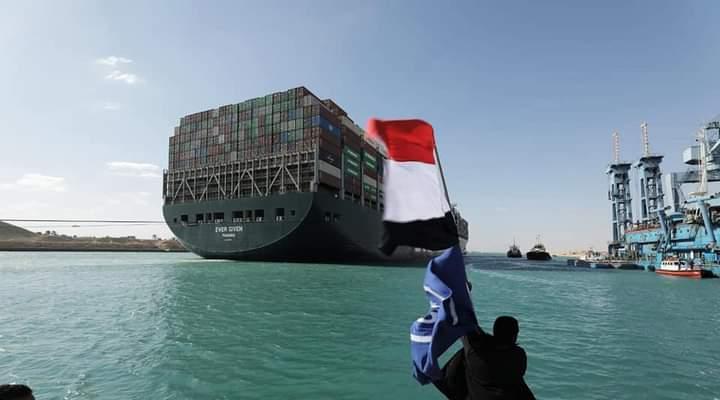 The grounded container ship in Suez Canal has been re-floated successfully, which means that navigation along the Canal can be resumed, Admiral Osama Rabie, Chairperson of the Suez Canal Authority (SCA), announced on Monday.

The EVER GIVEN vessel was dragged to the Great Bitter Lake anchorage area, in order to initiate the vessel’s technical inspection. The vessel had blocked the international waterway for six days.

Rabie said that Egypt succeeded in ending the crisis in the Suez Canal before reaching the stage of unloading the trapped ship’s cargo.

He stated in a press conference, on Monday evening, that for the first time in the world to dislodge trapped ship without unloading its cargo.

Egypt managed to re-float EVER GIVEN ship in a record time, he added, mentioning that he believes if such crisis happens anywhere in world, it would have taken 3 months to be solved, due to the ship’s huge size and cargo, but Egypt set it free in only 6 days.

“Two non-Egyptian giant tugboats arrived at Suez Canal, one from the Netherlands and another from Italy, but we did not use the Italian one,” Rabie revealed.

Rabie said that there are 422 vessels waiting to pass through Suez Canal, and none of them requested permission to take an alternative route, as they trusted in Egypt’s ability to end crisis.

He continued that 113 vessels started to navigate through Suez Canal at 18:00 Monday and the process will continue until 20:00 Tuesday.

“I believe if we kept working at the same rate, all delayed vessels will transit through canal within 3-3.5 days,” according to Rabie.

Rabie stated the SCA dispatched pilots to each ship waiting to transit through the canal, to facilitate their passage from the northern and southern directions, provided that the Authority will work around the clock over the coming days to end the congestion.

Talking about losses, Rabie said that SCA estimates daily losses due to the crisis at between $12-15m per day.

“We have nothing to do with Suez Canal blockage, and an investigation will be conducted into the incident to clarify its reasons,” according to Rabie.

He also announced that the SCA considers providing incentives to ships whose passage through Suez Canal delayed based on each vessel’s waiting period.

Talking about the possible reasons for the incident, he said that the investigation will reveal the truth. He said that Suez Canal pilots just offer consultation to passing vessels, but the safety of each ship is the responsibility of its captain.

“President Abdel Fattah Al-Sisi called us at least three times a day and put forward three scenarios, the last of which we did not want to reach, as it involved unloading the cargo of the ship,” Rabie said.

“We will have equipment with greater capacity in anticipation of possible developments that may occur in the canal,” he said, proudly adding, “

Earlier on Monday, Rabie had announced that the ship responded to the pulling and towing manoeuvres, and its course was significantly modified by 80%. The stern of the ship was moved away from the shore by 102 metres, instead of four metres.

The manoeuvres were scheduled to be resumed once the water level rose by 2 metres to its maximum levels, as of 11:30. This allowed the ship’s course to be completely modified to the middle of the navigational water-section.

Rabie sent a message of reassurance to the international maritime community, on Monday morning, saying that navigation in the Suez Canal, one of the world’s busiest maritime routes, will resume.

Meanwhile, Evergreen Line, which operates the Ever Given vessel extended its gratitude to the SCA and all the concerned parties for their assistance and support through this difficult and unfortunate situation. The company also expressed appreciation to the salvage experts and dredging team for their professionalism and relentless efforts over the past 6 days toward securing this outcome.

Egypt’s President Abdel Fattah Al-Sisi said that Egyptians had successfully ended the Suez Canal crisis to free the stranded ship, despite the enormous technical complexity of the process from every side.

“The world can be assured of a return to normal, as goods continue their passage through this main navigational artery,” the President said, “I thank every loyal Egyptian who contributed technically and practically to ending this crisis.”

Notably, the disruption in navigation through the canal has negatively impacted global trade. Russia’s Gazeta newspaper mentioning that the cost of sea freight has jumped dramatically due to the congestion of cargo ships at the Suez Canal, after navigation was disrupted due to the stranded container ship.

According to a Bloomberg report, the ship’s stranding in the Suez Canal will delay the delivery of oil products worth about $10bn, which has impacted oil prices in global markets.

Oil prices have fluctuated significantly in the past few days, due to the Suez Canal blockage.