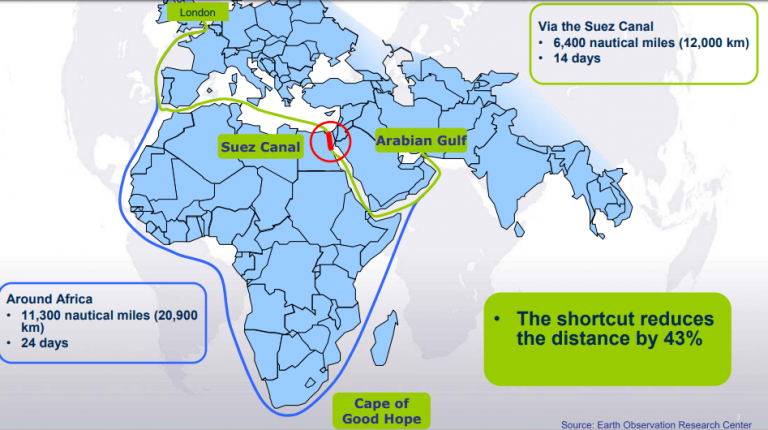 On 17 November 1869, Egypt announced the completion of its man-made waterway, the Suez Canal, calling it a gift to the world.

Running between Port Said and the Gulf of Suez, the canal connects the Mediterranean Sea to the Red Sea through the Isthmus of Suez.

The Suez Canal was constructed between 1859 and 1869 by the Suez Canal Company, established by Ferdinand de Lesseps in 1858. This was a time when Ismail Pacha was the Khedive of Egypt.

It linked the northern and southern hemispheres through the shortest maritime route between the three continents of Africa, Asia, and Europe.

The Suez Canal reduced the journey distance from the Arabian Sea in the south to London by approximately 8-10 days, depending on the ship’s speed.

Through its history, the canal has continuously evolved through several stages before reaching its current state. The idea was first to facilitate trade between the River Nile Delta and the Red Sea via a canal between 1850 BCE and 775 CE.

The idea was developed later by the Khedive Mohamed Sa’id Pasha between 1859 and 1869, to link the Mediterranean Sea and the Red Sea.

France went on to obtain 52% of shares in the Suez Canal Company, while Egypt held only 44% that were sold later to Great Britain in 1875.

Due to its geopolitical and economic significance, Egypt decided to nationalise the canal in 1956 under then President Gamal Abdel Nasser. The move led to tensions with the British Empire, France, and Israel.

As a result of the aggression on Egypt by the armies of the three countries, Nasser closed the canal.

In August 2015, Egypt inaugurated the New Suez Canal as an expansion parallel to the existing one, to maximise the benefits of the present Canal and its by-passes.

The expansion was also to double the longest possible parts of the waterway, to facilitate traffic in the two directions and minimise the waiting time for transiting ships.

In terms of geopolitics, the Suez Canal holds a strategic importance as the most significant water way, particularly due to its location in relation to the Middle Eastern oil trade in the Gulf and the Pacific Asian commercial trade.

The Suez Canal has ensured Egypt’s position as an obligatory channel between the Indian Ocean and the Mediterranean, and onto the Atlantic.