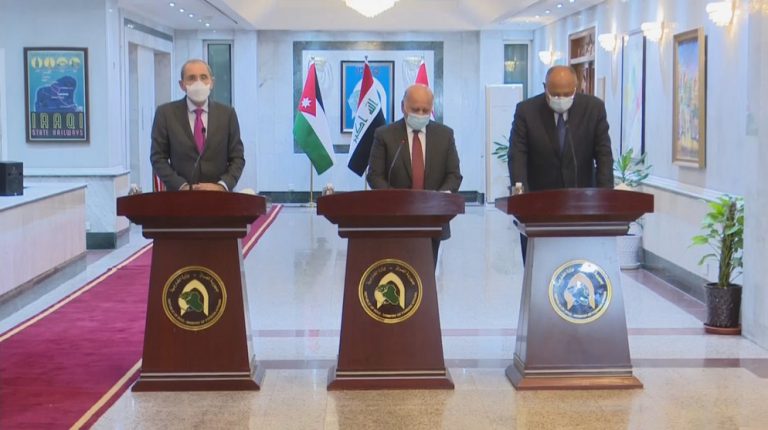 Foreign ministers of Egypt, Iraq, and Jordan have met to discuss joint cooperation and regional issues of mutual issues between the three countries.

Egypt’s Minister of Foreign Affairs Sameh Shoukry has confirmed that there is tripartite consensus between the countries in their views on issues in the region.

Speaking during a joint press conference with his counterparts from Iraq Fouad Hussein and Jordanian Ayman Safadi in Baghdad, Shoukry said that the meeting discussed preparations for an upcoming tripartite summit.

The leaders from the three countries will attend the meeting, which will take place as part of the tripartite cooperation mechanism between Egypt, Iraq, and Jordan.

Shoukry expressed his aspiration to hold the meeting in Baghdad at the earliest opportunity, which crowns the hard work and great effort made by the three governments.

He explained that the various aspects of tripartite cooperation and the projects proposed for implementation between the three countries in the economic and commercial fields were comprehensively discussed.

Shoukry said that the understandings reached by the governments of the three countries will be submitted to the upcoming summit, for the leaders to put into effect.

He emphasised that views were exchanged and discussions were held on developments in the region, especially the Palestinian issue, the crises in Libya, Syria, and Yemen, as well as cooperation in the field of combating terrorism.

The Foreign Minister said, “We discussed the importance of continuing work in order to maintain Arab water security, the issue of the Great Ethiopian Renaissance Dam (GERD) and  the water needs of brotherly Iraq.”

He stressed the need to work to preserve Arab national security away from interference outside the Arab region.

For his part, Iraq’s Minister of Foreign Affairs Fouad Hussein said that economic cooperation, the industrial city project, and energy issues were discussed.

This took place with an emphasis on the importance of combating terrorism in all its forms, and enhancing the level of coordination between the three countries to face the challenges facing the region.

Hussein indicated that the meeting discussed facilitating the granting of visas and movement between the three countries.

On the economic side, he noted that the meeting touched on cooperation in the field of industrial integration, rehabilitating Iraqi factories, and emphasizing the priority industrial sectors to enhance cooperation between the three countries in the pharmaceutical industries, veterinary medicines, agricultural pesticides, leather, clothing and chemical industries.

For his part, Jordan’s Ayman Safadi said that his country is looking forward to an effective summit that will have practical outcomes to enhance tripartite action.

He expressed his hope that it would achieve tangible results and act as a step on the road to strengthening joint Arab action.

He added that this meeting is a message of solidarity with Iraq and its government in its efforts to enhance security and stability, and provide a better life for the Iraqi people.

Safadi clarified that the security and stability of Iraq is a necessity for the security of the entire region, and that Iraq must be neutralised from any regional tensions.

Cryptocurrency is evolution of money with new assets: Visa