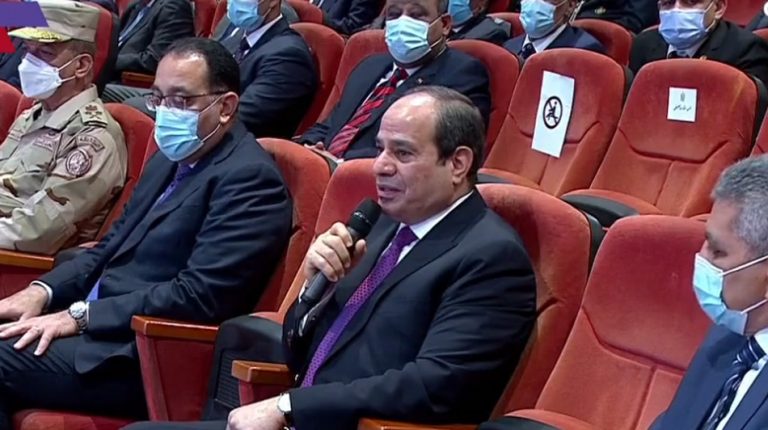 Al-Sisi’s remarks came during his visit to the Suez Canal Authority’s (SCA) Maritime Training and Simulation Centre in Ismailia. It came as part of celebrations of the Egyptian success in re-floating the mega Ever Given container ship on Monday.

The ship had been blocking the canal for six days, and its re-floating has allowed for navigation in the strategic waterway to resume.

Al-Sisi asserted that the Suez Canal’s blockage has reaffirmed its importance, and hailed the efforts made by Suez Canal workers in resolving the issue.

He added that the Ever Given crisis had put an end to talks on Suez Canal alternatives, as the Canal is a global facility for trade. The President thanked those countries that had offered assistance to Egypt to ensure the ship could be re-floated.

Al-Sisi directed for the provision of all necessary equipment to the SCA, to support its capabilities for the upcoming period.

He indicated that the freedom of navigation in the Suez Canal is a form of development and urbanisation that Egypt is keen to achieve.

The President added that investigations into the Ever Given incident will be left to the SCA and all relevant investigation authorities.

Egypt’s port system is linked by road and railway systems to meet the growing needs of global trade, the President asserted.

He announced that Egypt will open two ports within the next two years, including that at Ain Sokhna, which will become the largest port on the Red Sea, as part of the state’s plan to develop several ports.

SCA Chairperson Osama Rabie said that the Canal has recorded the least number of accidents in the world. He added that it is the first time for a trapped ship to be re-floated without any damage, and without requiring the unloading of its cargo.

Rabie noted that about 113 vessels had navigated through the Suez Canal on Monday, in addition to 140 vessels which will navigate through on Tuesday, out of 422 ships waiting to pass.

He said that if the Suez Canal kept working at the same rate, all delayed vessels will navigate through the channel within three days.

Rabie noted that the volume of dredging work that took place in the Suez Canal to re-float the Ever Given reached a depth of 18 metres, pointing out that about 15 locomotives participated in the floatation process.

He confirmed that the most important lesson learned from the ship crisis is that the SCA has to modernise the dredger fleet.