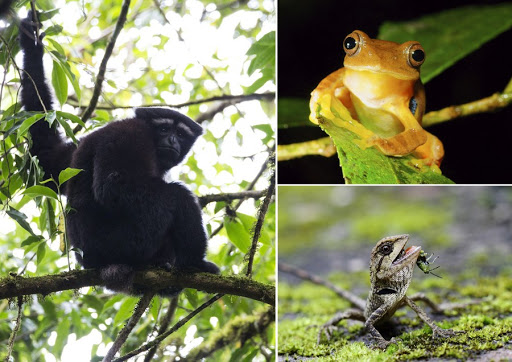 Exploring China’s biodiversity hotspot: If you’re told that a “Skywalker” has been spotted in the forests of southwest China, there’s no need to feel confused. It’s not the Jedi of the “Star Wars” series, but refers to a gibbon species named by Chinese scientists.

The species, with white eyebrows, was found in the Gaoligong Mountains in 2017. The mountain range links three biodiversity hotspots including the Himalayas and vast mountains in southern Asia.

The total 34 biodiversity hotspots globally are areas that are both rich in life and at high risk of destruction, while in terms of the number of species, the Gaoligong Mountains are home to about 17 percent of higher plants, about 30 percent of mammals and 35 percent of birds in China.

The biodiversity hotspot sits in Yunnan Province, with its capital Kunming chosen to be the host city of the 15th meeting of the Conference of the Parties to the Convention on Biological Diversity (COP15) scheduled in October.

The Skywalker gibbon, or the Gaoligong Mountains hoolock gibbon, is morphologically and genetically distinct from other species, according to a research paper published in the American Journal of Primatology.

Their beards are completely black or brown instead of white, and white hair is absent in the suborbital area. They are far rarer than the giant pandas in terms of the population — less than 150 in China, according to Fan Pengfei, one of the authors and a professor in life sciences at Sun Yat-sen University.

Fan said the English name “Skywalker” was inspired by Luke Skywalker from the “Star Wars.” The name bears hopes of scientists that the species can survive tenaciously in the wild, as the corresponding Chinese name “Tian-xing” comes from a Chinese classic “I Ching,” or “Book of Changes,” he noted.

A family of three Skywalker gibbons resides near Nankang Village in the city of Baoshan.

Pointing to the gibbons foraging on the distant treetops, Yang Youshan, a forest ranger, read out their names so easily as if they were his friends.

It is not an easy task to track and monitor the gibbons as they are highly vigilant, wandering in the tree crown and jumping fast.

Yang has been following the traces of the gibbon family for 12 years, and the three have already got accustomed to the presence of Yang and his coworkers.

“We have to protect our green home like protecting our eyes,” said He Guipin, who has spent 26 years exploring the forest.

He leads a patrol team of 20 people, managing and protecting over 53,300 hectares of forests in Gaoligong. They are responsible for protecting forest resources, preventing forest fires and cracking down on illegal logging and poaching.

In 2011, He and his colleagues took a photo of a black monkey. It was later confirmed as a new species of the golden monkey after DNA identification of extracted feces and hair.

The Chinese primate expert group named it “Nujiang River golden monkey.” He deems his participation in the discovery and protection of the species the most fulfilling thing ever.

“This is the fifth golden monkey species in the world, and now it has become a star animal in Gaoligong while being under top-class protection,” said He, noting that the population of such monkeys has risen from about 100 to 250, with their range of activities expanding.

Statistics show that since 1980, more than 620 new species of animals and plants have been discovered in Gaoligong, outnumbering any other eco-region in China.

Incomplete statistics also indicated that there are 5,728 species of higher plants, 205 species of mammals, 525 species of birds and 1,720 species of insects in Gaoligong, including more than 100 species of wild plants and animals under national-level protection.