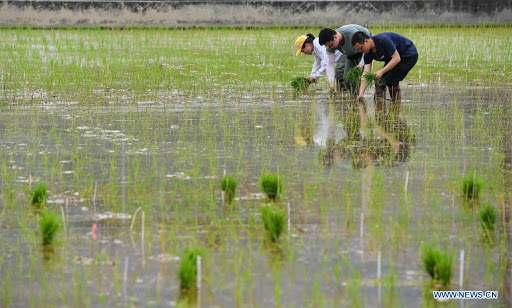 About 1,500 rice seeds that returned from a journey to the moon last year have been transplanted to the rice fields from a greenhouse in south China.

The seeds were planted in the greenhouse of the National Engineering Research Center of Plant Space Breeding of South China Agricultural University (SCAU).

These rice seeds traveled more than 760,000 kilometers to the moon last November and returned to Earth on Dec. 17 after 23 days of flight aboard China’s Chang’e 5 lunar probe.

The seeds were second-generation space-bred ones because their “parents” were also space-bred seeds.

But the experiment on the Chang’e 5 probe is different from previous ones. It was the first such experiment conducted in a deep space environment. The space flight time was longer, and the probe encountered radiation in the Van Allen Belts and from sunspot activity, according to the center’s director Chen Zhiqiang.

Stronger hereditary effects are expected to be produced in this experiment, as a deep space environment is more similar to a real space extreme environment, according to the center’s deputy director Guo Tao.

It will help researchers learn how hereditary effects induced in deep space and a low-Earth orbit environment differ and provide important experimental samples and data for further research on mutation rules in space breeding, Guo said.

The space-bred rice is expected to be harvested at in early July.