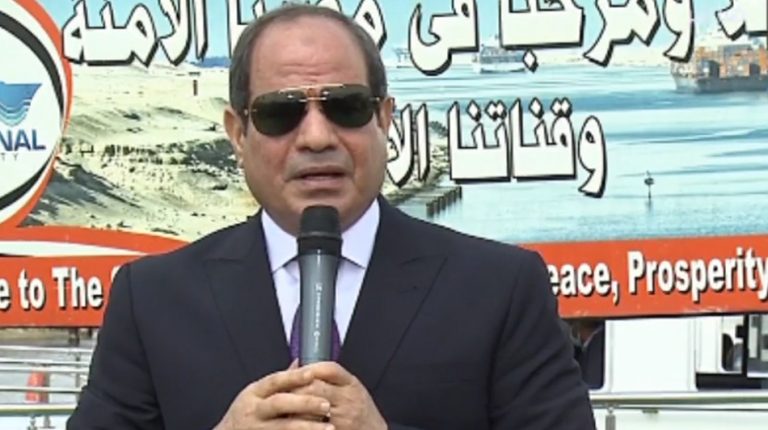 Egypt will allow no one to take a single drop of its water, and no one is untouchable for us, President Abdel Fattah Al-Sisi asserted on Tuesday.

Al-Sisi’s remarks, in which he also noted that Egypt does not threaten anyone, came during his visit to the Suez Canal Authority’s (SCA) Maritime Training and Simulation Centre in Ismailia.

The visit took place as part of the celebrations of Egypt’s success in re-floating the mega Ever Given container ship on Monday.

Speaking on the Grand Ethiopian Renaissance Dam (GERD) issue, Al-Sisi said, “I always underscore that negotiation is our first option from the beginning. Any hostile action is ugly and it will have an enormous effect on the region’s stability.”

The President explained that Egypt choose to pursue the negotiation path, and asserted that it does not look for anything outside theinternational law.

He reiterated that Egypt does not threaten anyone, and it only adoptsreasonable and rational dialogue.

President Al-Sisi said that if any external actors took even one drop of Egyptian water, there will be inconceivable instability in the entire region. He added that it is not beyond Egypt’s capacities to take action should its water be taken.

“If anyone affects Egypt’s water rights, they will see our reaction. Again, I am not threatening, but our water is a red line,” he stressed.

Earlier on Tuesday, Ethiopian Deputy Prime Minister and Foreign Minister Demeke Mekonnen said that his country will commence the second filling of its massive Blue Nile dam in July as planned.

Last week, Egypt’s Minister of Water Resources and Irrigation Mohamed Abdel Aaty said that his country has shown high levels of flexibility throughout the negotiation period over the GERD.

Abdel Aaty added that the negotiation process has stalled, and thatEthiopia is attempting to waste time.