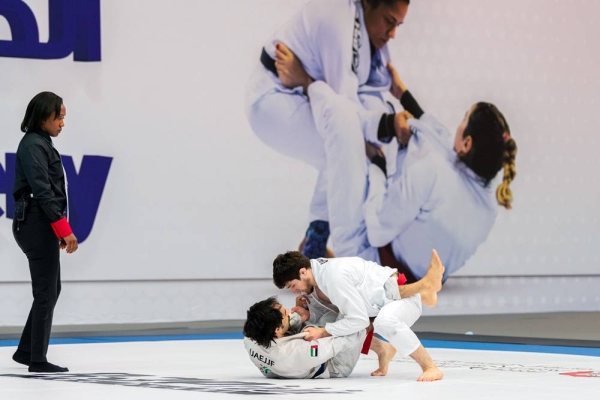 On 9 April, the 16th edition of the Egypt International Professional Jiu-Jitsu Championship will take place at the Track Sports Hall, with the participation of nine countries. It is expected that some of the best players of different age groups will participate in the tournament.

The tournament includes all grades of white, blue, purple, brown and black belts, and will run according to the rules as defined by the International Brazilian Jiu-Jitsu Federation (IBJJF).

Jiu-jitsu wrestling is a martial art, based on the philosophy that it begins with peace and ends with surrender. It is an art specifically made to defeat the weaker person who is more powerful.

It is the product of several great thinkers and experts in martial arts. In jiu-jitsu, practitioners learn to subjugate an opponent larger in size and stronger than they are, using the simplest techniques.

This art opens a new field in human thought on so-called ground fighting. Roman wrestling and judo share a little of the technique of ground fighting, the aspect in which jiu-jitsu is specialised.

At the global level, jiu-jitsu often wins over other martial art formats, whether it is a matter of proving the strength or competition between youth or children.

There is no tie in jiu-jitsu, there must be a winner and a loser. The game depends on fair competition, adhering to certain movements during the game, and not using any illegal moves, which are rejected by the rules of the game.

Legitimate movements in this game are limited to striking blows that weaken and paralyse the opponent’s movement, making them unable to escape. It also exerts all forms of pressure on the joints, and knocks the opponent to the ground by pulling them down.

It is not permissible to use illegal movements such as biting, pulling hair, and other movements that may adversely affect the principle of this sport based on fairness, honourable competition and sportsmanship. Winning is by subjecting the opponent, eliminating them, or exposing them to fainting, with winners decided on points calculated, or preference in terms of positioning and making the fewest mistakes.

Magic company for sports competitions has signed sponsorship contracts with Scope Real Estate, and Al-Hala for Publishing and Distribution to sponsor the 2021 International Pro Jiu-Jitsu Championship.

The contract was signed by Scope Chairperson Mohamed Ghobashi, in the presence of Adly Al-Qei, former Al Ahly SC’s Recruitment Director and Vice President of the company. Hala Al-Bashbishi, General Manager of Al-Hala for Publishing and Distribution House also signed the sponsorship contracts along with Mustafa Abu Al-Naga, CEO of Magic.

Ghobashi stressed that sponsoring Egyptian sports comes as part of the company’s vision, which focuses on supporting the country’s athletes. He noted that the private sector plays a major role in all societies and has a part of its social responsibility, including caring for athletes.

He added that the sponsorship of the International Pro Jiu-Jitsu Championship continues the company’s social role in supporting sports investment.

Ghobashi also noted that supporting sports is the right way towards achieving dreams and ambitions, and one of the most important pillars of real development.

For her part, Al-Bashbishi said that this sponsorship confirms her keenness to support Egyptian sports, adding that her company always seeks to support sport.

This comes out of the company’s belief in the importance of sport in the development and prosperity of society, in addition to its pivotal role for rapprochement between nations and different peoples.

In the same context, Egypt’s Minister of Youth and Sports Ashraf Sobhy noted the importance of having large economic entities that sponsor athletes. He said that it is important for the government, economic entities, civil society institutions, and the media to cooperate in supporting the sports system and athletes in Egypt.

Bahrain detains soccer teams and scores of players and athletes