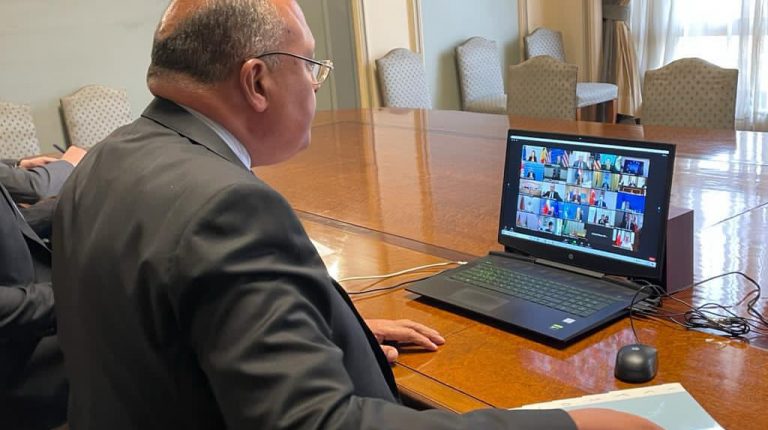 Egypt’s Minister of Foreign Affairs Sameh Shoukry has expressed his country’s support for all countries in combating terrorism.

He also expressed Egypt’s increasing concern about the growing activities of terrorist groups claiming to be affiliated with the terrorist organisation, ISIS in Africa. The minister stressed his country’s full support for all African countries in their efforts against terrorism.

The minister’s remarks came during his participation in a meeting of Foreign Ministers from those countries of the International Coalition to Defeat ISIS. The meeting was held virtually, and discussed developments in the joint international efforts to eliminate the terrorist organisation known as ISIS.

In a statement released by Ahmed Hafez, Spokesperson for Egypt’s Ministry of Foreign Affairs, Shoukry reportedly stressed that ISIS represents a serious global threat, despite the important defeats they have suffered over the past years.

Shoukry affirmed his country’s unequivocal rejection of the recent terrorist operations that targeted a popular crowded market in Baghdad, as well as its full support for the Iraqi people and government. The minister voiced Egypt’s sincere condolences to the victims of this painful incident and their families.

He pointed out that achieving a comprehensive and sustainable victory over ISIS requires more joint action between the coalition countries.

He also said that defeating ISIS will not come through military measures alone, but rather through refuting the extremist ideology that the organisation espouses. Additional efforts need to be made in confronting the destructive propaganda that the Islamist groups uses to recruit fighters, and bring them to its ranks.

Shoukry reiterated that Egypt is ready to support the international coalition’s efforts in these aspects, based on its wide  experience in this field, and the continuous work carried out by its religious institutions in this regard, notably Al-Azhar.

The minister said that there is a need to confront all terrorist organisations without exception, and to intensify efforts to prevent them from attracting new members to their ranks. The efforts would extend to preventing them from obtaining the necessary funding and training for their destructive activities.

Shoukry noted Egypt’s commitment to the coalition’s goals and its determination to confront terrorism in all its forms and manifestations. He concluded by nothing his country’s full support for efforts to achieve stability and reconstruction in both Syria and Iraq.