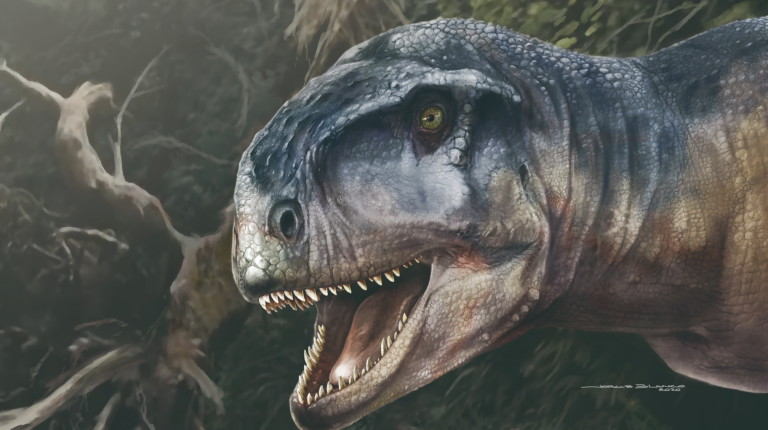 A description of a newly discovered species of carnivorous dinosaur, named the ‘one who causes fear’, or Llukalkan aliocranianus, has appeared in the peer-reviewed journal, Vertebrate Paleontology.

Around 80 million years ago, as tyrannosaurs ruled the Northern Hemisphere, this lookalike was one of 10 currently known species of abelisaurids flourishing in the southern continents.

A fearsome killer, Llukalkan was “likely among the top predators” throughout Patagonia, now in southern Argentina, during the Late Cretaceous. This was due to its formidable size, as it could grow up to five metres long, extremely powerful bite, very sharp teeth, huge claws on their feet, and their keen sense of smell.

It had a strange short skull with rough bones, so that in life, its head had bulges and prominences like some current reptiles such as the Gila monster or some iguanas.

Its hearing was also different to other abelisaurids, as the make-up of its skull suggests it was better than most, and similar to that of modern-day crocodiles.

Its full name comes from the native Mapuche for ‘one who causes fear’, Llukalkan, and the Latin for ‘different skull’, or aliocranianus.

It lived in the same small area and period of time as another species of furileusaurian (stiff-backed lizard) abelisaurid – Viavenator exxoni – just a few million years before the end of the age of dinosaurs.

Fossil remains of Llukalkan and Viavenator were found just 700m apart in the Bajo de la Carpa Formation, near the same famous fossil site at La Invernada in Argentina.

“This is a particularly important discovery because it suggests that the diversity and abundance of abelisaurids were remarkable, not only across Patagonia, but also in more local areas during the dinosaurs’ twilight period,” says lead author Dr Federico Gianechini, a paleontologist at the National University of San Luis, Argentina.

Abelisauridae were a striking family of theropod dinosaurs averaging five to nine metres long that prowled mainly in Patagonia and other areas of the ancient southern subcontinent Gondwana, recognised today as Africa, India, Antarctica, Australia, and South America.

To date, almost 10 species of this fearsome predator have been unearthed across Patagonia. While abelisaurids resembled T-Rex in general appearance, with tiny stubby arms, they had unusually short, deep skulls which often bore crests, bumps, and horns, and were unique.

Moving upright on their hind limbs with huge claws that they may have used to stab their prey, Llukalkan had extremely powerful bites and very sharp teeth with which to tear down their prey. They could also move fast thanks to their powerful hind legs.

The fossilised remains of Llukalkan include a superbly preserved and uncrushed braincase. This new species is similar in many respects to Viavenator, except that it is smaller.

The holes in the skull through which the veins pass are also larger and more widely separated from the supraoccipital crest, one of the bones that forms the braincase, among other differences. But the new dinosaur’s most distinctive feature is a small posterior air-filled sinus in the middle ear zone that has not been seen in any other abelisaurid found so far.

It means that Llukalkan likely heard differently to other abelisaurids, most probably doing so better. They would also have done so in a similar manner to that of a modern day crocodile, explains co-author Ariel Mendez from the Patagonian Institute of Geology and Palaeontology, Argentina.

“This finding implies a different hearing adaptation from other abelisaurids, and likely a keener sense of hearing,” says Mendez.

However it may have lived, the fossil evidence of Llukalkan’s adaptations suggests that abelisaurids were flourishing right before the dinosaurs went extinct.

“These dinosaurs were still trying out new evolutionary pathways and rapidly diversifying right before they died out completely,” adds Mendez.

Despite their significant finding, there is still a lot to discover, with Gianechini saying that the discovery suggests that there are likely more abelisaurid out there that have yet to be found.

He noted that the researchers will be looking for other new species and a better understanding of the relationship among furilesaurs.