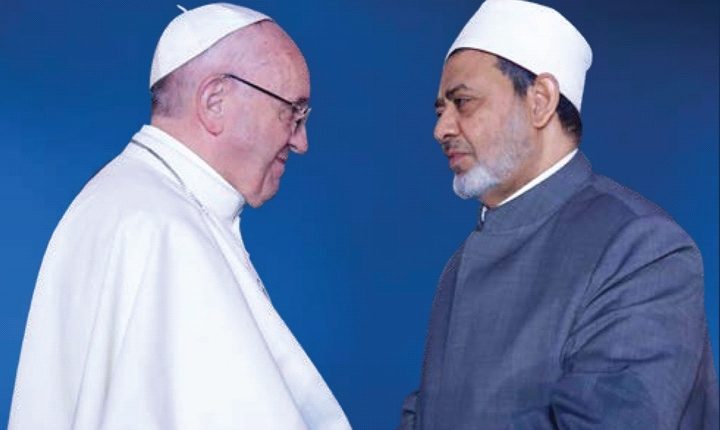 A newly-published, English-Arabic book has appeared, called “The Pope and the Grand Imam: A Thorny Path – A Testimony to the Birth of Human Fraternity”, and written by Mohamed Abdelsalam, Secretary-General of the Higher Committee of Human Fraternity (HCHF).

The book gives a detailed account of the stages of the Human Fraternity Document (HFD), before its eventual signing on 4 February 2019 by Pope Francis and Grand Imam of Al-Azhar Ahmed Al-Tayeb in Abu Dhabi.

In his book, the author recounts the bold, accelerated steps taken by Al-Tayeb and the Pontiff of the Catholic Church towards promoting a mutual understanding and interfaith dialogue.

This unique relationship, Abdelsalam says, was kicked off by the Grand Imam’s first visit to the Vatican, to which Pope Francis responded with a visit to the Al-Azhar headquarters in the Egyptian capital, Cairo.

Subsequently, the fraternal bond between the two figures deepened through their several joint meetings, which the author witnessed. In one of these meetings, the idea of signing a document on human fraternity was conceived.

Throughout the book, the author gives an in-depth account of the milestone moments in the preparations for the HFD and the two figures’ joint historic visit to the UAE.

Abdelsalam explains the reasons for choosing the UAE to present the HFD from Abu Dhabi, in a manner that caught the attention of the entire world.

The author also highlights the historic role of the HFD’s patron, Crown Prince of Abu Dhabi and Deputy Supreme Commander of the UAE Armed Forces, Sheikh Mohammed bin Zayed Al Nahyan, to support the efforts to translate the HFD and its values into action.

The book also commends the pivotal role of the Muslim Council of Elders (MCE) in supporting Al-Azhar’s efforts to foster dialogue and bridge the gap between the East and the West.

Abdelsalam concludes his book by highlighting the serious work being done to actualise the principles enshrined in the HFD, especially the formation of the HCHF to meet this end.

The book features two forewords: one by the Grand Imam, and one by Pope Francis I. It includes a special section featuring comments on the book by a group of high-profile politicians, academics, and intellectuals from around the world.

Al-Tayeb described the book as a significant account of all the stages in creating the historic Document on Human Fraternity. He further noted that the book is truly a work of art, written in a very beautiful and accurate style, and not full of a high-flown intellectualism, flights of fantasy or partiality, or even rigidity.

In his foreword, Pope Francis wrote that the book registers the significant moments in the journey leading up to signing the HFD.

Abdelsalam, who currently serves as Secretary-General of the HCHF, was an eyewitness to most stages in the creation of the Document, as he previously served as a special advisor to Al-Tayeb for more than eight years.

During this period, Abdelsalam participated effectively in promoting interfaith dialogue and achieving rapprochement among religious institutions, the most significant of which is the relationship between Al-Azhar and the Vatican. These efforts culminated in the signing of the HFD in Abu Dhabi in February 2019.

The author said that he was keen to document the significant moments throughout the human fraternity journey. He felt it was important for the reader to know the motives, circumstances, and challenges that accompanied the creation of such a historic document.

He further pointed out that the phrase “A Thorny Path” in the book’s title indicates the courage of the two great religious figures, which enabled them to overcome the challenges of announcing the HFD.

He added that the document might never have seen the light of day without the sincere patronage of Sheikh Mohammed bin Zayed Al Nahyan, as well as the persistence and true belief of these two great religious figures.

The author has dedicated the book, which is now available at bookstores on global publishing websites, to his homeland, Egypt; in recognition of the favours the country has bestowed upon him, as well its place as a role model of coexistence and peace.