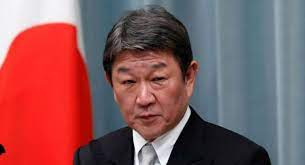 The second Japan-Arab Political Dialogue has been held in an online format, in the presence of a number of heads of state and official regional representatives from Japan and the Arab world.

Also present were Ahmed Aboul Gheit, Secretary-General of the Arab League, as well as 21 Foreign Ministers and representatives from Arab League member states.

Referring to the novel coronavirus (COVID-19) pandemic and the changing power balance in the international community, Motegi said that it is extremely important for Japan and the Arab world to maintain a frank exchange of views.

This recognises the long-lasting friendship between the two sides, and would ensure communications are maintained when there are growing instabilities and uncertainties in the international affairs.

The Minister underlined Japan’s intention to commit itself more deeply to the Middle East and its affairs, and to reinforce cooperation with a view to maintaining and solidifying the rule-based international order.

Regarding the Middle East Peace Process, Motegi stressed that his country’s position relating to the Palestine-Israel issue remains in support of a two-state solution.

He said that Japan will continue its efforts to advance the peace process through direct negotiations among the concerned parties, by taking advantage of the recent positive developments.

The Minister expressed his concerns about the continuing high tensions in the region over Iran, and said that Japan will continue its diplomatic efforts toward easing tensions and stabilising the situation in the region.

Meanwhile, Qatar’s Deputy Prime Minister Sheikh Mohammed bin Abdulrahman bin Jassim Al-Thani and Aboul Gheit expressed their views on regional and international issues. They referred to the various collaborations between Japan and the Arab countries that have already been implemented.

Motegi explained Japan’s support for the Arab countries on achieving the Universal Health Coverage (UHC), including addressing the global health crisis based on the principle of human security.

He provided several successful examples of Japan’s existing assistance that have contributed to countermeasures against the pandemic. He also recognised the need to bring success into the efforts under the international frameworks, in order to ensure equitable access to vaccines by all countries, including developing countries.

Other representatives also mentioned the necessity of international collaboration to tackle the pandemic.

With regard to maritime security, Motegi said that the Middle East is rich in energy resources, and located in the middle of critical sea lanes connecting East Asia and Africa through South Asia.

He stressed that it is necessary to ensure a free and open order in the region, which underpins the prosperity of Indo-Pacific through those sea lanes.

Motegi expressed his appreciation for all participants, and stated that he is determined to continue to cooperate with Arab countries, with a view to further enhancing comprehensive, multi-layered, and strategic relations.