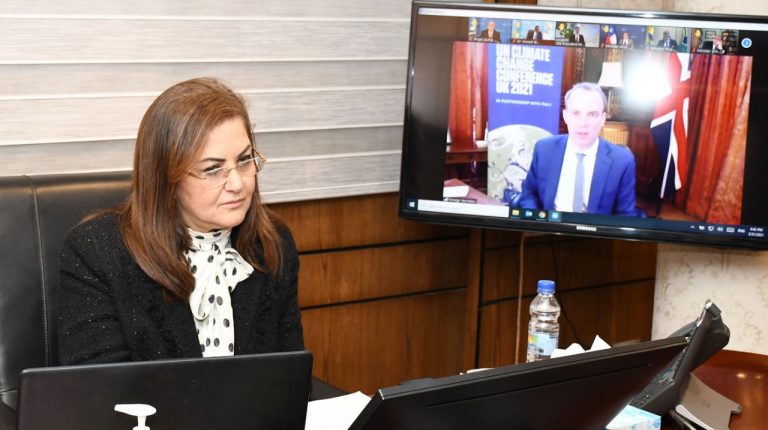 The UK hosted the Climate Development Ministerial, on Wednesday, where countries most vulnerable to the impacts of climate change helped set the international agenda.

The meeting took place in the run up to the 2021 United Nations (UN) Climate Change Conference (COP26), which will be hosted by the UK in Glasgow this coming November.

The event, co-chaired by COP26 President Alok Sharma and the British Foreign Secretary Dominic Raab, was convened virtually. It was attended by the UK’s International Champion on Adaptation and Resilience for COP26, Anne-Marie Trevelyan.

The Ministerial brought together representatives from various countries, including: Egypt’s Minister for Planning and Economic Development Dr Hala El-Said; the US Special Presidential Envoy for Climate John Kerry; and senior representatives from France, Germany, the UAE, Sudan, and others.

The ministerial was also attended by representatives from youth groups, indigenous peoples and key financial institutions.

Attendees addressed four areas: working on solutions to the impacts of climate change faced by many developing countries; how to better respond to address losses and damages; alleviating fiscal pressure in developing countries, improving their access to finance to decarbonise their economies; and finally improving the quantity and quality of climate finance, including mobilising funds for adaptation and resilience and supporting the most vulnerable

El-Said said that the Egyptian Government has taken many steps at the national level to face the challenges of climate change, including the implementation of several projects to protect the northern coasts from rising sea levels.

This is in addition to implementing a project to rehabilitate and cultivate 1.5 million acres, to achieve food security and compensate for the deterioration and erosion of land in the Nile Delta.

Also part of these steps has been a project to rehabilitate and renew the national network of water canals at a cost of EGP 68.5bn (€3.65bn), as part of modernising traditional irrigation methods and improving the efficiency of using water resources.

The Egyptian Government has additionally implemented infrastructure development projects, a rehabilitation of informal areas, and worked to improve the quality of life in the countryside. It has targeted 1,500 villages in the first phase out of a total of 5,000 villages as part of the “A Decent Life” Initiative.

The minister pointed out that most of these projects are funded from national resources, in addition to a mixture of other resources and support from development partners.

She noted the importance of increasing this support, taking into account the burden imposed by the novel coronavirus (COVID-19) pandemic.

El-Said reviewed the policies and measures set by the Egyptian government related to climate finance, including the adoption of “sustainability standards”.

Egypt has also launched its first “green bonds”, worth $750m, as a pioneer in this regard in the Middle East and Africa region. The country is also currently working on preparing and launching a “National Climate Change Strategy” and a “National Report for Financing Development” (FFD Report). These will determine the pace of identifying needs, gaps, opportunities and challenges to address climate change, achieve sustainable development and eradicate poverty.

UK Foreign Secretary Dominic Raab said, “Today is all about hearing from those countries that are most vulnerable to climate change – those on the front line of this fight.”

“We need to consider where international systems can do more to deliver urgent climate action,” he added, “We know that lack of finance creates barriers to countries implementing the Paris Agreement.”

Combined with the challenge of recovering from the pandemic, this threatens to set back progress, but the UK is responding, Raab noted.

“We have committed £11.6bn over the next five years in climate finance,” he said, adding, “The way forward must be to engineer a green recovery that delivers for people and planet.”

Ahead of the event, the UK Government announced £500,000 of funding for the new Initiative for Voluntary Carbon Market Integrity. High-quality voluntary carbon markets allow organisations or individuals to purchase carbon credits without being legally required to do so, such as for social responsibility reasons.

They could increase finance flows to where it is most needed, helping to create greener, and more inclusive and resilient economies around the world.

In addition to the Climate Development Ministerial, the IEA-COP26 Net Zero summit took place on Wednesday where decision makers from more than 40 countries came together to focus on the need for international collaboration.

Co-hosted by the IEA Executive Director Fatih Birol and COP26 President Alok Sharma, the event aims to accelerate a clean energy transition ahead of COP26.

Sharma said, “This is one of the most important events we are hosting in the run up to COP26, and we must acknowledge that the people who have done the least to cause the climate crisis are suffering the most.”

“Developed countries have a particular responsibility to support the response of communities, which are most vulnerable to climate change,” he added, “It is absolutely vital that we find solutions because we are running out of time to keep the crucial 1.5 degree target within reach.”

Earlier in February, Sharma visited Egypt and met with key government officials and civil society members to discuss how the UK can work with Egypt to address climate change challenges.