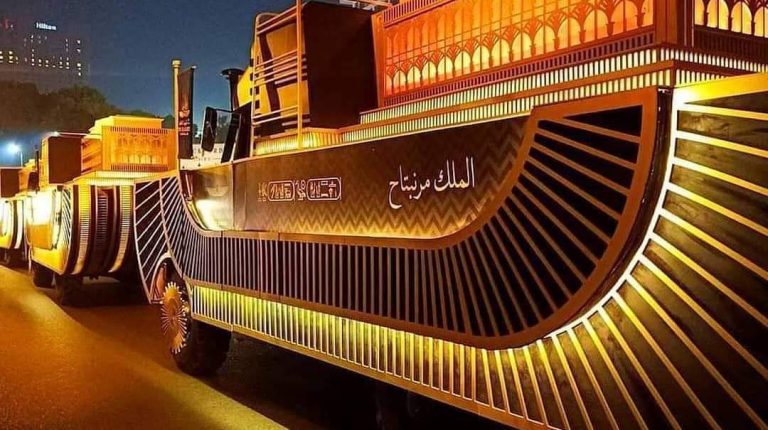 The eyes of the whole world will turn to Egypt, on Saturday evening, as one of the most important archaeological events of the twenty-first century is taking place.

The three hour long Royal Mummies Parade is set to start at 6 pm Cairo time, on Saturday, and will see 22 royal mummies transferred to their new home.

The move will take place in the form of a magnificent parade from the mummies’ current home, in the Egyptian Museum in Cairo’s Tahrir Square, to their new permanent display at Fustat’s National Museum of Egyptian Civilization.

The royal mummies that will be put on display belong to Ancient Egypt’s 17th, 18th, 19th, and 20th Dynasties, and include 18 mummies of pharaohs, and four of queens.

The scene will begin when the doors of the Egyptian Museum in Tahrir Square are opened, to allow the 22 mummies to leave for the last time.

The mummies will be transferred in specially constructed cars for the procession, bearing a logo and the name of the royal mummy present in the car in Arabic, English, as well as hieroglyphs.

Horse-drawn war chariots, specially made for the occasion, will take their place on both sides of the road during the parade.

Before the start of the parade, a 21 gun salute will took place in honour of the ancient rulers, and to signal the exit of the cars, one after the other, from the main museum gate.

The cars will move in a circular shape around Tahrir Square itself, moving around the obelisk that now lies at the centre of the square.

At the same time, the obelisk and the buildings around it will be lit up for the occasion, with the procession then set to move along the banks of the River Nile.

The procession path includes eight points, the most important of which are Tahrir Square and the Ain Sira Lake. The ceremony and parade will be broadcast, with TV screens placed in the streets, in addition to 400 international channels presenting live from the event.

The procession will feature military music, with an impressive artistic performance displayed in celebration of the royal exit from the museum. A number of actors will participate in the ceremony talking from different tourism destinations, including Sawsan Badr, Hussein Fahmy, Mona Zaki, among others.

The highly-anticipated event will be attended by world leaders and other notables, including, UNWTO Secretary-General Zurab Pololikashvili, and the Director-General of UNESCO, Audrey Azoulay.