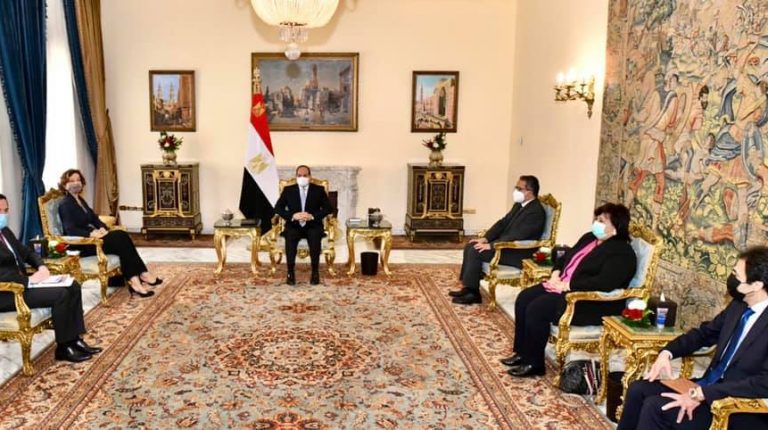 This includes exhibiting them to the Egyptian public and the international audience in the best possible way, a statement from the presidency has said.

Al-Sisi’s statements came during a meeting with Director General of UNESCO, Audrey Azoulay, who was present in Egypt to witness and celebrate the country’s rich heritage and support its safeguarding, notably with regard to the challenges of urbanisation and sustainable tourism.

Egyptian Presidency Spokesperson Bassem Rady said, on Sunday, that the meeting between Al-Sisi and Azoulay included Minister of Tourism and Antiquities Khaled El-Anani and Minister of Culture Inas Abdel Dayem.

Al-Sisi praised the continuous support provided by UNESCO internationally and regionally to the sectors of education, culture, and science.

He also applauded the organisations efforts to promote and protect antiquities and heritage in Egypt and around the world, the statement added.

The President affirmed that the state’s steps in this context followed a balanced path between development efforts and the preservation of the value and integrity of unique archaeological sites.

This includes the development of all historical areas in Cairo, “so that the capital of Egypt becomes an open museum that reflects the nobility of ancient and contemporary Egyptian civilisations”.

Azoulay attended the Royal Mummies Parade, on Saturday evening, the ceremony marking the transfer of the royal mummies from the Egyptian Museum in Cairo’s Tahrir Square to the National Museum of Egyptian Civilization in Fustat.

She praised the parade, adding that it “represented a message to the whole world and presented the rich heritage of Egypt over different ages”.

Azoulay also said that the event embodied the effort and great support provided by the Egyptian state under the leadership of the President to preserve Egypt’s cultural and archaeological heritage.

“Seeing the mummies enter the new National Museum of Egyptian Civilization, knowing they are now more accessible, marks the end of much work to improve their conservation and exhibition,” Azoulay said before the ceremony, “This raises emotions that go much further than the mere relocation of a collection. We will see the history of Egyptian civilisation unfold before our eyes.”

Relations between UNESCO and Egypt have been particularly strong since the campaign to safeguard the Nubian monuments of Abu Simbel between 1963 and 1968, which lay the ground for UNESCO’s World Heritage Convention of 1972.

Egypt is a sound partner of the organisation in all its fields of competence, namely culture, science and education. It is an active participant in work to meet the challenges of the future, such as artificial intelligence, open science and Priority Africa.