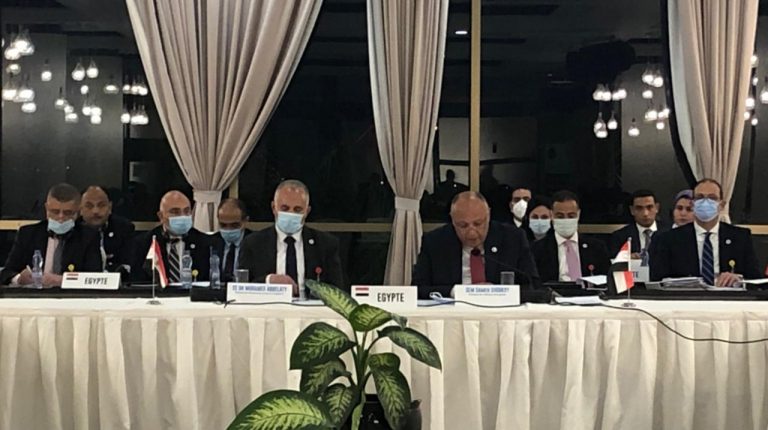 The current meetings on the Grand Ethiopian Renaissance Dam (GERD) are the final opportunity to reach an agreement on the controversial dam, according to Egypt’s Minister of Foreign Affairs Sameh Shoukry.

Shoukry also said that that Egypt had negotiated over a decade with the aim of reaching a fair, balanced, and legally binding agreement on filling and operating the controversial dam.

Both the Foreign Minister and Minister of Water Resources and Irrigation Mohamed Abdel Atty participated in the ongoing meetings being held in the Democratic Republic of the Congo’s (DRC) capital, Kinshasa.

The Egyptian ministers are attending at the invitation of Felix Tshisekedi, the DRC President and the current head of the African Union (AU).

These meetings aim to relaunch the negotiations on the dam, which have stalled for several months. They also aim to preserve Egypt’s water access rights, and secure it from the potential damage the huge dam could cause.

Shoukry stressed that Egypt came to Kinshasa with a sincere political will to reach an agreement that achieves Ethiopia’s development goals. At the same time, it would preserve the rights and interests of the two downstream countries, namely Egypt and Sudan.

It is hoped that the Kinshasa meetings will lead to the launch of a new round of effective and serious attended by international partners to ensure its success, Shoukry said.

He stressed that these negotiations are considered a final opportunity that the three countries must seize. This would help reach an agreement on filling and operating the Dam during the coming months and before the next flood season.

Shoukry also expressed Egypt’s keenness for the success of these negotiations, and to work to overcome all the points of contention that obstructed the previous round of negotiations.

If all parties have the political will and good intentions, it is possible to reach the desired agreement, which will open broad prospects for cooperation and integration between the countries and peoples of the region, Shoukry said.