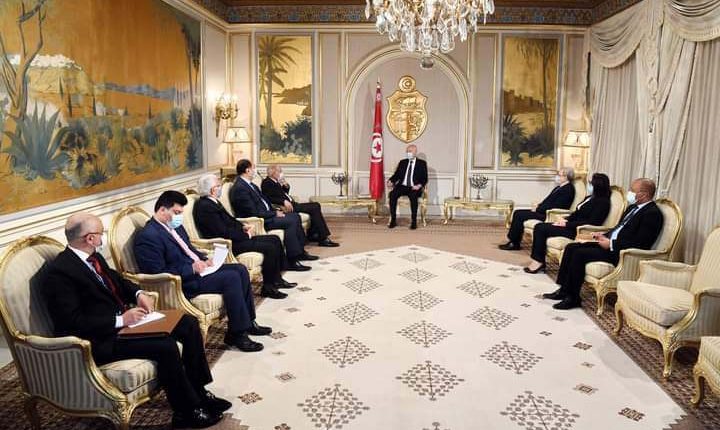 Ahmed Aboul Gheit, Secretary General of the Arab League, met with Tunisia’s President Qais Saeed, on Monday, at the Carthage Palace in the Tunisian capital, Tunis.

The meeting witnessed an exchange of views on the various Arab issues on which decisions were issued at the 30th Arab Summit in Tunis on 31 March 2019.

A source at the Arab League said that President Saeed stressed the importance of developing and putting into effect the organisation’s capabilities to meet the aspirations of its member states.

This would also cover the Arab League’s mechanisms of dealing with the challenges facing the region.

Saeed pointed out that these developments require all Arab countries to work collectively to prevent risks and bring stability and progress to them.

The meeting also witnessed an exchange of views on the situation and the several crises in the region. Foremost of these is the situation in Libya and the Palestinian issue, the source said. The meeting dealt with the ongoing preparations for the next Arab summit and the topics on its agenda.

For his part, About Gheir agreed with President Saeed’s vision on the issues discussed. This included the need to restore stability in all parts of the Arab region and activate the role of the Arab League in this regard.

On the other hand, Aboul Gheit met with Othman Al-Jarandi, Minister of Foreign Affairs, Immigration and Tunisians Abroad.

A statement issued by the Arab League in Cairo said that the meeting reviewed all the challenges facing the process of joint Arab action.

The two sides discussed ways to commence the Arab League’s role in the files of some Arab countries that are encountering exceptional situations, notably Libya and Palestine.

The Arab League’s statement indicated that Aboul Gheit exchanged views on the various Arab issues that will be discussed during the League’s Council meetings at the summit level and foreign ministers.

The statement pointed out that Al-Jarandi reiterated to Aboul Gheit Tunisia’s readiness to provide possible support to overcome any obstacles that may hinder the League’s work.

This would allow the organisation to play its hoped-for role in serving the aspirations of the peoples of the member states.

Aboul Gheit’s visit to Tunisia comes as part of its current presidency of the 30th regular session of the League of Arab States Council at the summit level.

During his visit to Tunisia, Aboul Gheit will meet with the directors of specialised Arab organisations working in Tunisia for dialogue on several topics.

These are notably the role of the Joint Arab Action System, with its components in helping member states to mitigate the effects of the novel coronavirus (COVID-19) pandemic on member states.