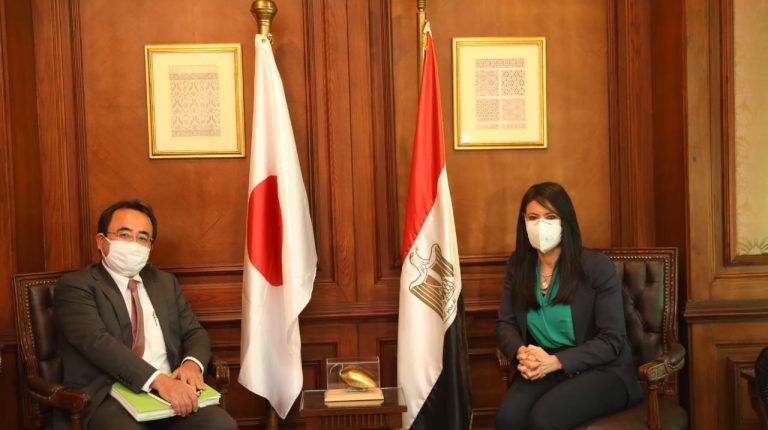 The meeting took place in the presence of Omura Yoshifumi, the Chief Representative of the JICA Egypt Office, alongside other JICA representatives in the agency’s Egypt operations.

It took place to discuss and enhance cooperation between both countries across various sectors.

At the beginning of the meeting, Minister Al-Mashat welcomed Matsunaga on his first visit to Egypt, after assuming the role of JICA’s Regional Director. This comes after his previous role as JICA’s Chief Representative from 2012 to 2015.

The minister applauded the strategic cooperation between Egypt and Japan, which proved necessary especially during the novel coronavirus (COVID-19) pandemic. It saw Egypt provide $9.3m in development financing, alongside other means of cooperation

Minister Al-Mashat reviewed her ministry’s strategy and vision through the principles of Economic Diplomacy. This focuses on advancing international partnerships to accelerate the development of the UN Sustainable Development Goals (SDGs) in Egypt.

The minister said that despite the challenges facing development cooperation during the past year, the partnership with JICA has succeeded in completing several projects.

This includes: the agreement to develop the Cairo Metro Line 4; the opening of the Egypt-Japan University of Science & Technology (E-JUST); and the implementation of the New Deirut Barrages project in cooperation with the Ministry of Water Resources and Irrigation.

The discussion between Minister Al-Mashat and Matsunaga also looked into future areas of cooperation and the possibility of collaborating in comprehensive health insurances. This came in addition to discussing the current areas of cooperation in the field of antiquities, and in the development of the Grand Egyptian Museum (GEM).

The positive indicators and growth rate achieved by Egypt’s economy during the past year, despite the economic and social impacts of the pandemic, were also discussed during the meeting.

Both Minister Al-Mashat and Matsunaga also emphasised the importance of the private sector engagement in the national development framework. This comes with a view to creating job opportunities and promoting sustainable growth in the country.

Matsunaga commended the Ministry of International Cooperation’s role in coordinating with the concerned entities in promoting partnerships with JICA.

He highlighted the ministry’s efforts in the development financing agreement for budget support that was signed in 2021 at a value of $240m.

He expressed a desire for more collaboration during the coming period to maximise the added value of the partnership, and for opening new horizons of bilateral cooperation between the two countries.

Matsunaga pointed out Egypt’s success in transferring its ancient royal mummies from the Egyptian Museum in Tahrir Square to the National Museum of Egyptian Civilization (NMEC).

He also added that efforts such as the Golden Parade are all in preparation for the celebratory opening of the Grand Egyptian Museum (GEM).

He also shared that the Egyptian Government is one of the countries that best handled the COVID-19 pandemic, mitigating its socioeconomic impacts through its home-grown response programme.

The ongoing cooperation portfolio between Egypt and JICA amounts to $ 2.7bn. This includes: $287m for investment in human capital through the Egyptian-Japanese partnership for education development; $1.12bn for electricity; $552m for transportation; $450m for tourism and antiquities; $240m for the financing of development policies; and $57m for irrigation.

Grand Egyptian Museum opening to be as impressive as Royal Mummies Parade: El-Anani