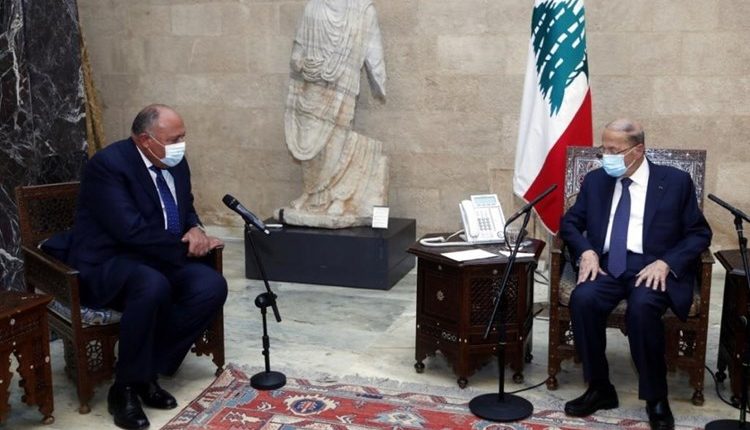 Egypt’s Minister of Foreign Affairs Sameh Shoukry confirmed, on Wednesday, that Cairo continues to make every effort to communicate with all sides involved in the Lebanese crisis to ensure a resolution.

Shoukry’s remarks came after his meeting with Lebanon’s President Michel Aoun, in which he referred to the state of the political blockage in Lebanon. The minister noted that the ongoing crisis is due to the confusion among Lebanese politicians in the formation of the government.

“The political framework is governed by the constitution, the Taif agreement, and the importance of adhering to these main pillars of stability, and we will spare no effort to help Lebanon at this delicate stage,” he said.

He also said that his visit came “as part of Egyptian efforts to urge Lebanese political parties to speed up the formation of the rescue government”.

“The Egyptian political leadership is very keen on Lebanon’s stability and overcoming the crises it is currently going through,” he added.

For his part, President Aoun expressed appreciation for “the role that Egypt is playing to help Lebanon in the face of the various crises it is experiencing, especially the government crisis”.

“We hope that these efforts will yield positive results, especially if there is a real will to get out of this crisis, through the adoption of the constitutional and charter rules on which the Lebanese regime is based, and in cooperation with all Lebanese parties without excluding them,” Aoun said.

He stressed the accuracy of the tasks that will be entrusted to the new government. This comes particularly in the necessary reforms that the Lebanese representatives must take.

At the forefront of these tasks is criminal financial scrutiny to hold accountable those who stole the money of both the Lebanese and the state, Aoun said.

During his meeting with Prime Minister-designate Saad Hariri, Shoukry expressed Egypt’s full support for Lebanon to resolve the current stalemate that hinders the formation of a Lebanese government.

He emphasised Egypt’s vision for Lebanon to form a government of national competencies that elevates the country’s supreme interests, and that enjoys the support of the international community.

Shoukry stressed Cairo’s readiness to provide all support and assistance to overcome the crises facing the country, particularly the repercussions of the Beirut Port explosion last August, and the novel coronavirus (COVID-19) pandemic.

He expressed the hope that the new government will be formed, in order to meet the aspirations of the Lebanese people to achieve security and stability.

All efforts to form a new government have apparently stalled, as wrangling over cabinet posts persisted eight months after the outgoing government resigned. The resignation took place in the wake of the massive explosion at the Beirut Port last August.

Despite public outrage and international pressure to form a government and enact reforms needed to unlock aid pledges, Lebanon’s leaders have traded blame for the government delay. Aoun has called on Hariri to step down if he is incapable of forming a government suitable to all parties.

It is notable that differences continue between Aoun and Harir, on quotas and the distribution of ministries. Meanwhile, the country has been plunged into a suffocating economic crisis unprecedented for decades.